Just how many versions of The Hitchhiker’s Guide to the Galaxy exist? In book, BBC radio, BBC broadcast and big screen… and now audio book. I’ve been listening to HHGTTG as read by Douglas Adams, this one’s from 1977 (I think) and it seems much more unabridged than anything I recall reading. Still, listening to the man reading his own creation is truly a pleasure. It gave a great background to playing a little World of Warcraft last night.

I can now say that I have bowled at Lucky Strike, and unfortunately I find it seriously lacking, even for a “glamour alley.” Jhim, Jenifer and I had a good time though, despite this. I won’t go into all the details, but Jenifer called, reserved a lane, wasn’t told the rate she was supposed to pay for a “reservation” as opposed to “checking for an open slot” – but they caved on that and we played, or tried to. Our lane was experiencing problems, but we had drinks and appetizers and could chat away some time. 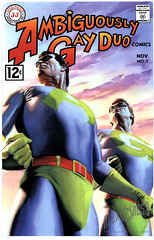 About 30 mins had passed since we’d gotten there and still, no bowling. So I head to the front counter to ask what’s happening with the lane fix’y-upp’y. It turns out that the front counter has no communication with the mechanics behind the lanes, so if I hadn’t asked, we might never have known what was up.

We did bowl our games… eventually, we did have a good time, their equipment is bad, their balls are horridly maintained. I know they are just plastic/urethane house balls, but those tend to chip and crack more often and need to be buffed/polished. As it was, one took a little chunk out of my thumb, and I believe Jenifer broke a nail. Oh, and they need to sweep/mop more often–yes it was my fault for wearing my good bowling shoes, but I had to dodge plenty of spills that didn’t seem to get cleaned up the entire time we were there.

I wouldn’t recommend it to anyone if they were interested in bowling. The drinks were ok, the food looked great and the pool tables were very popular and we had no problems with the dress code, however the signage has changed to have a lot LESS entries than the original one people were making such a fuss about.