I was told that my last two posts were a little on the Ebenezer Scrooge side. Personally, I think the person that thought that can bite my shiny metal ass, but in this weather they might have trouble removing their lips. It isn’t that I’m scrooge’y about the holidays, I’ve just had enough of them, especially some of those most overplayed and commercialized ones during the year. I mean just because it’s getting darker earlier and colder outside doesn’t mean that people are going to forget about the Oct-Jan holidays. Maybe one of the reasons retailers were having so much trouble with the seasonal bottom line was all that money they pumped into the seasonal reminders and advertising? I think this shirt from Shirt.Woot, Hol-O.D. is brilliant and captures my feelings exactly. 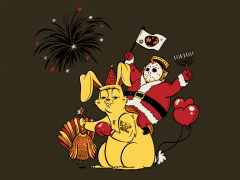 That said, I had a great New Year’s Eve and New Year’s Day. For most of Jan. 1, I sat around the house playing games and watching TV. Kyle cooked an amazing meal of collard greens, black-eyed peas, mashed potatoes, cornbread and tempeh fingers w/peanut sauce. Parts of this meal are apparently a tradition of some sort rooted in sympathetic magic that has completely passed me by. But it was delicious, and if it gets my year on the good foot, all the better! Aside from freezing my butt off walking/waiting for a bus between our places, it was a fantastic evening.

I am in the office way too early today, but after being properly stuffed last night, getting to sleep was no problem. I never trust myself to “putter around” in the morning when I’m too early, so I just head out for work early, it’s easier than the alternative which usually has me late. Even so, almost no one is in, even the Starbucks wasn’t open when I walked by, so I had to settle for juice instead of coffee. We’ll see how long that lasts. 😉