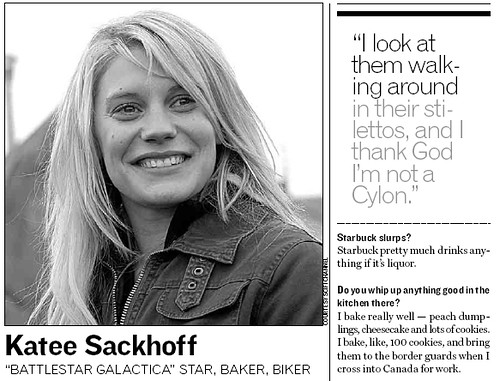 Even though I’ll likely be recording it on TiVo… WOO-HOO! BSG TONIGHT!!! The above is clipped from today’s Express interview with Katee. I so loved that line about the Cylons that it had to be shared. And she bakes cookies! I like her more than Jamie Bamber now. I’ve been trying to keep up with a few television shows and add more into the mix. So far I’ve tried to watch/tivo/download/purchase episodes of Heroes, Studio 60, Fantastic Four, The Venture Brothers, Drawn Together and Yu-Gi-Oh G/X. I also keep an eye on Barefoot Contessa, Healthy Eating, America’s Test Kitchen and the various Julia Child and Jacques Pepin shows on PBS. Based on my preferences, the unit will also record various stuff, mostly britcoms and even though I have the DVDs, it’s nice to come home to an episode of Keeping Up Appearances, or a Parker Posey movie without me having to search for a disc. I’m open to suggestions for other shows to find/watch as well, but I think I might need to get an upgrade kit for my TiVo hard drive. I don’t plan to buy a new Series 3 unit, because that’s like $800 for the unit and to transfer lifetime service over. Maybe if the price comes down a bit before the holidays… maybe.

My site appears to be down at the moment, along with others on the same provider, so I’ll have to post to LJ first and then mirror it back over to urbanbohemian.com for a change.

I’m loving the weather, sure it’s cold and rainy, but I still love it. I slept with the sounds of the rain last night, I could wear a coat today and not overheat and all the pressure that’s been building up in my head was released with those first few precious drops of rain.

This morning I realized I think I’m officially ½ of a cute couple. An occasional morning ritual of ours is to text each other good morning and see where our relative positions to metro are. If he’s getting to his station around the same time I am, I’ll wait to grab the same train (we’ve designated a car as our car) so we can talk on the way in. It’s fun for those days that we don’t have any evening plans and we both disembark at the same station. When he goes to catch his connecting train we say goodbye with a quick kiss. That last part is a bit odd for me as I’m usually not one for public displays, even in this town where the gays pretty much run the non-Hill portions of the city, but I’ve become extremely comfortable with it and just don’t care who sees. Though I have noticed a few wide eyed stares, it doesn’t bother me. I suppose that’s a good thing.