A reverend’s gay, big shock, Doogie’s gay, big shock, anyone else come out this week that I missed? Looks like LiveJournal was down over the weekend as well, I felt a great disturbance in the drama, as if millions of emo voices constantly whined in annoyance and were suddenly — no, they kept on whining. OMG, WTF, OH NOES, etc. 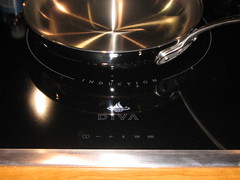 Moose and I hit the Cooking & Entertaining show and it was a blast. Mostly it was a vendor show so we got lots of brochures, a few tastings, a little bit of crappy swag and a lot of information. I think the coolest thing at the show is officially this stovetop by Diva (naturally I’d love it). It uses magnetic induction to heat, it won’t turn on unless it detects a ferrous pan on the surface and it brought water to a boil faster than anything I’ve ever seen. My inner sci-fi, gadget and food geeks were all very pleased. I took a few more pics around the show, and while I was prepared to spend money, there wasn’t really anything there that I was impressed with, at least nothing that I could do anything with. I’m not really in a position to buy a new stovetop! There was a woman with some Waterford crystal and I may have to visit her store sometime soon, otherwise it was just a fun experience. I’ve mostly gone to vendor shows centered around art or computer stuff and this was a nice change.