Including the energon axe! 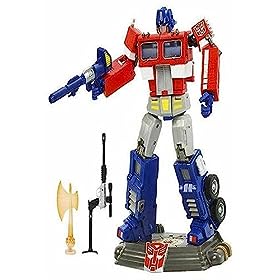 I feel horrible for wanting this, but I absolutely do and may very well buy it. Not because it speaks or has a display stand or anything. it’s the axe. For the geeks in the audience, y’all remember the axe Prime manifested when he went toe-to-toe with Megatron… yeah that one. Plus Amazon does seem to have it at a better price than some other places on the web Habsro included. Not quite a fangasm, but definitely would be fun to have on the fireplace.

I made it back home ok, there was a moment I thought my flight would be delayed, but apparently someone submitted the wrong info to the LCD screens. The flight timing was a bit tight but that’s what I expect from US Airways. I picked a no-connections itinerary for a reason. My metro train karma was great when I got back to DC as well, waiting about a minute for each train and getting home before 6. J came over after work and we headed out for dinner at Tonic. They’re doing their usual Tuesday wine night each night this month, so we’ve taken advantage of it a few times when we don’t feel like getting a cab someplace else in town.

Our Saturday gift exchange before I left town went pretty well, I got wine, a Riedel Syrah decanter and a Bodum french press. I bought him some stocking stuffers and nice (I hope) gifts, and mostly we just sat around and watched a bit of tv. Sounds boring, but with our schedules lately, just being bums together was kinda nice. I even got into the spirit for some last minute decorating and bought us stockings, and put up some lights.

Nothing much else to report lately, the trip home was nice, but very much the usual. My mother gave me the Bon Apetit cookbook, and the parents doled out a nice check. I’m thinking of using the money to get a museum or zoo membership or something. I’ve always wanted to do that, but just never have. I’m thinking of resolutions for 2007, or at least a to-do list. I’m not going to attempt the überlist or anything, just some stuff I’d like to see myself complete by the end of the year. This one seemed to go by so quickly and I got some stuff done, but I know I could do more. Top of the list is cleaning out the temple, home and body. I’ll be making many a trip to goodwill, I think, as well as a few late-night runs to the street below hoping someone drives by and takes the crap with them. I miss living on a street in a neighborhood where you could do that without someone complaining about it like you get in a condo.

So what did I miss? Things I realized today: just because you possess a midriff doesn’t mean you need to display it every day and nearly everyone has a secret Starbucks order, much like In-And-Out that may no longer appear on the menu, but you know they’ll always have the right stuff on-hand to make it.

Oh yeah, I have an earworm of sorts. The Eddie Izzard bit where he’s talking about how no one really knows all the lyrics to “The 12 Days of Christmas” but that everyone knows the “Fiiiiiiive gooooooold riiiiiiiings!” bit. I’ll try to post it later just to get rid of it. Additionally it’s being remixed in my head with the Muppet version where Miss Piggy says, “Ba dum bum bum!” after each 5 Gold Ring’ing.