The flurries are fleeting… 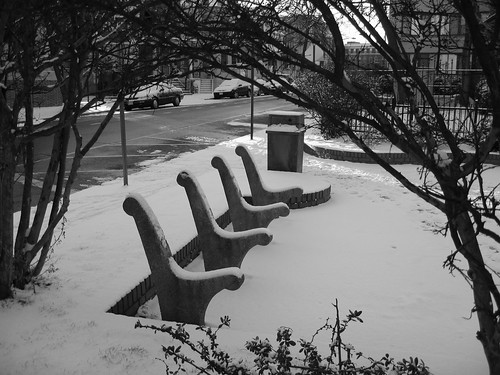 Hobbes said it best, “It’s like having a big white sheet of paper to draw on!” I knew it wouldn’t last long, but snow still gets that child’s reaction out of me, it’s fun to watch, more fun to hope that there will be buckets and buckets of it to stop the world for just a day, or even a 1/2 day. In Georgia it took barely a few minutes of snow to cause all schools, offices and day care to halt in their tracks. In DC, in that same amount of time there will just be tons of accidents, it seems.

In the city I like taking shots of the snow in black and white because it makes it clear that the subject of the picture is the snow as it comes through the starkest white in the image.

And for a good article with an amusing quote: Rice Pressed On Fired Gay Linguists

“For some reason, the military seems more afraid of gay people than they are against terrorists, but they’re very brave with the terrorists,” [(D-NY) Rep. Gary] Ackerman said. “If the terrorists ever got a hold of this information, they’d get a platoon of lesbians to chase us out of Baghdad.”