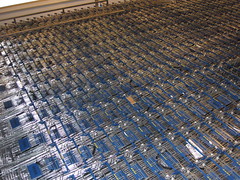 After staying home from work today to accept delivery from UPS of my new PC (which they never even called me for, but I ain’t complaining), I made a run to Radio Shack and Starbucks — true urban geekdom.

The new machine is up and running though, it’s got Vista which I figure will completely crash sooner or later and I still need a new video card but it’s all good. I impressed myself with a bit of iTunes-fu managing to put my old hard drive into an external and point the current iTunes install at the music and former library. All my playlists and ratings are preserved, woo-hoo!

Did a little shopping at IKEA over the weekend, I felt like we were such the gay yuppie power couple. Took the zipcar out to College Park, ran a few errands and headed back to town. Ah, city life.