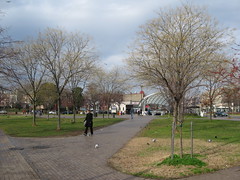 It is so a Bloc Party listening day.

Is there such a thing as an ambush promotion? Or at the least should one be the first instead of the last to know when such a thing happens? A few months ago I said to a co-worker, at the time my manager, that I smelled change in the air, for better or for worse I didn’t know. We’ve got a building move coming up, we’ve had new people on our team, we’ve got a software/system streamlining taking place and all the while there are things happening behind the scenes that we’re just not privy to. All in all it reminds me of my last job where a whole bunch of things started happening at once and the next thing you know I’m getting the phone call.

I don’t think it will get that bad, but there was just a moment of panic when I found out from my co-worker last night via IM, bless his heart. It derailed my evening a bit, not necessarily from the news, but the fact that no one had told me, asked me, consulted with me on what was going on. I knew about some of the events, but there were other factors I wasn’t aware of. I’m content to do the job for a short time, but I don’t really see management here in the long term, maybe not anywhere in the long term — it’s never been a goal of mine. I’m good with people, but I don’t believe I’m good at managing people, especially people I know well. I’m definitely going to have a drink for the equinox tonight.

Aside from that, the new machine is working out well though I might head over to Best Buy for a new video card as City of Heroes looked horrid last night. Everything else is good, but that apple commercial was kinda accurate on the number of prompts it puts you through to do things. Still, it’s pretty. And I’ve been working on my 2.0’ness with Twitter. It’s sort of like a condensed version of a blog/LJ, actually more like LJ. People enter in via the web interface or text message a short blurb of what they’re doing, and others can get those messages on the web or straight to their SMS device. I guess it’s like dodgeball (which is also very cool) without the “out and about” aspect.