I would love to know the meaning behind this post-it note I saw on metro last Friday night. Oddly enough it touched on a conversation a friend and I have been having this week, but still is it viral? art? a hastily scribbled threat to someone riding the train? I haven’t seen any other notes on the train or around so it must be a one-off, but definitely a little weird. 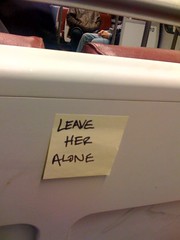 When I was riding back home that night, a woman did come onto the train, just had an odd look to her. A little heavy, sort of hastily nicely dressed: nice hat and dress, black stockings ending in socks and black sneakers, nice coat and scarf. She was heavily made up, so much so that I thought she might have been a drag queen. I couldn’t tell if she was asian or latina, but she had an odd fidget to her, she kept looking around and breathing heavily. I was into my headphones, so I kinda jumped when she turned across the aisle, leaned over and thrust an open folder into my face. Inside was a sheet of paper with writing and all I really caught was “Avon Breast Cancer Walk” before I smiled and shook my head no. She got up in a huff and walked a little further down the car, repeating the folder-in-your-face move with a group of chattering teenagers and then another guy seated near them. After the guy said no, she got very huffy, opened the folder in front of her face and said something very sharply and very loud. I couldn’t make it out since I’d turned up my music a bit to offset the teens. Whatever it was she said caused the guy to get up and move to another part of the car, well away from her.

After that there were no further incidents and I got off at my station and headed home. Perhaps that post-it note was just an advanced warning.

Remember the Black Crowes? Aside from hearing a reference/joke about them on Michael Ian Black’s recent comedy album, I assumed they’d just gone really quiet and stuck to live performances. Apparently they have a new album coming out and they are not pleased with the review they got from Maxim, with just cause:

How is it that a magazine can review an entire album–and assign a star rating to it–without actually hearing the album?

Case in point: the “review” of Warpaint–the new album by THE BLACK CROWES–in the March issue of Maxim magazine. The writer–who has not heard the album since advance CDs were not made available–wrote what appears to be a disparaging assessment anyway, citing “it hasn’t left Chris Robinson and the gang much room for growth.”

Incredulously, the magazine gave the album a two and a half star rating–although neither the writer nor the editor could have heard more than one song (the single “Goodbye Daughters of the Revolution”).

When approached for an explanation, the magazine described the review as “an educated guess preview.” Huh?

I know that there’s at least one way that I can think of that a reviewer could have heard an entire album even though the group claims not to have released any advance CDs, so I can imagine why Maxim is maintaining a serious *mum* on any further comment. And even if you did miraculously get a copy of the album in question, how about a little fact-checking to see if you were in fact supposed to have it and not just assume it had been made available for review?

So uh, how about that Ralph Nader? … Yeah, maybe the nation could stick a post-it on his bicycle seat saying Leave US Alone.