Your results may differ. 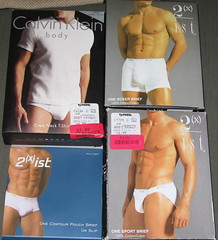 These boxes really need to come with a disclaimer like that. Over the weekend I went out to Potomac Mills and got my shoppin’ on. Oddly though, I only really picked stuff up from the discount stores and Nordstrom Rack. Being at Potomac Mills doesn’t guarantee discounts, I’ve found as most stores are rebranding their outlets as “factory stores” even going so far as to print a special label. So you can never be sure that you’re actually saving money at the outlet moreso than you would at a clearance sale in the regular retail location. I mostly got undies (underthings, mens’ furnishings, what have you) and shirts, though the Item of the Day was a really nice black velvet blazer. Yeah I know it’s kitsch, but ask me if I care. After tromping around the mall for a bit, we didn’t really find much else worth buying and headed to IKEA. There were a lot of tempting items, but I settled on a DAVE laptop stand for near the couch/tv and I saw some coffee tables up close that I’d been considering. After all that, it was back home to attempt to get stuff done while waiting for the oncoming fatigue attack from all the walking around. I passed out around 5:30, I think. 🙂

Michael and I like to joke around about “Big Gay” in reference to how when some piece of news hits, all the gay blogs, non-profits, papers and magazines rally around it regardless of how much of a non-issue it may actually be. Generally these are softball issues that are easy fights while they leave the big stuff to fester. He and I have seen a few stories lately that would make great fodder for this, but I’m hoping this one goes ignored: The Ugly Homophobic Truth About the Rickroll by Fritz at Pam’s House Blend.

I concede that Family Guy did introduce the phrase, “This is a song by a gay guy,” that hardly capped off tons of people watching that video either now or when it first aired and thinking, “That dude is so gay.” In both of the more common meanings of the word, possibly all three. (Hell, I would have totally had a pinup of Rick Astley in my room if I didn’t think I’d get thrown out of the house.) Blue-eyed soul artists typically get a reaction because that voice shouldn’t be coming out of that mouth, but with Rick Astley no one expected Opie to sound like Barry White. And the idea of the Rickroll isn’t “I’m sending a picture of this dude that is teh ghey,” it’s “Ha-ha, gotcha!”

In order to hasten the demise of the Rickroll, I have created the Bananaramaroll. Check it out on YouTube: http://youtube.com/watch?v=xmQnJGAIDZQ

My goal is to have this clip of Bananarama’s I Heard a Rumour achieve over 25 million hits on YouTube. It will stand as a counterpoint to bigotry and homophobia.

Honestly, I’d have thought the better solution would have been sending out more links to 2 Girls, 1 Cup. It’s a cultural meme, it’s funny, it’s not homophobic. I won’t go so far as to say get over yourself, but really just let it go.