Let me see that THRONG… 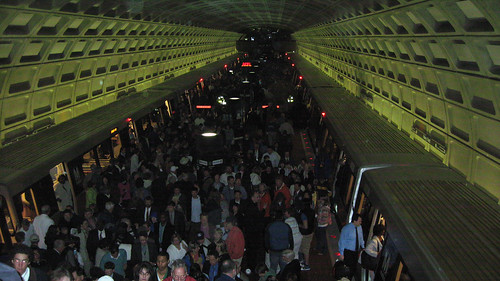 I can definitely say that I had a religious experience this morning. The trains were packed with regular commuters and all the Catholics there was very little space on the car and no personal space to be had at all. The only thing I can say about most of the riders was that they were very nice, aside from a few Type-A parents worried about getting separated from their kids, everyone was all smiles and “pardon me” and “i’m so sorry” when they bumped into you, so I can really only be upset with the sheer numbers of people, not their attitudes.

I also believe that I felt the spirit. On the train there were a number of priests and I ended up surrounded by a few of them, initially face to face, but they all turned around to talk to their friends and each one of them was so not respecting my personal space and as I told Betsy this morning, I wasn’t sure whether I should be turned on or religiously moved. Well I’m pretty sure something moved, but I believe I’m veering into blasphemous territory. However if the Catholics would stop ordaining hotties, I’m betting the gays would leave you be. Some of these priests were just too fine and I definitely could have used a Father figure, if y’know what I’m saying.

A good number of people took the offer to telework today so the office is near empty. I’m liking using the word telework instead of telecommute because it focuses on using the net to do your work, not just avoid your commute. I don’t know if the Pope’s motorcade will travel by outside my building or approach from the other side of the stadium, but if I have stuff to do here I won’t bother heading outside to catch a glimpse. I was expecting it to be a lot worse today, but I don’t think I’ll have many more pictures from the day.

In other news RCN sucks and is completely made of FAIL. Their tech came yesterday to install a CableCARD into my TivoHD and left before the job was done after he encountered a screen that he didn’t recognize and assumed that it was therefore my problem. Phone calls to tech support were absolutely useless as the reps didn’t even understand my problem even when I explained it to them slowly and repeatedly, even using terms that should have told them exactly what was going on. The kicker was that they wouldn’t send the tech out again last night nor would they try to accommodate me by putting in a rush on a new tech appointment. I felt myself turning into one of those angry customers who when they hear the term, “I’m sorry” or “I apologize,” it just sends them into a red rage.

I have to call them back today to let them know whatever they did at their end didn’t work and I’m not looking forward to it. I mean I’ve worked in customer service, it isn’t that difficult to level with a customer and it is possible to read from a script without making it sound as if you’re actually doing so. Failing to do either of those things is only going to get you an irate customer. So basically I have no cable tv service at all, not even lower tiers, because RCN’s tech didn’t finish the job, even though he reported that he did. If I miss Battlestar Galactica because of their incompetence, I will feel absolutely no shame about downloading a high-quality, commercial-free version. None whatsoever. 👿