in DC: awkward for partners who are not similar in height 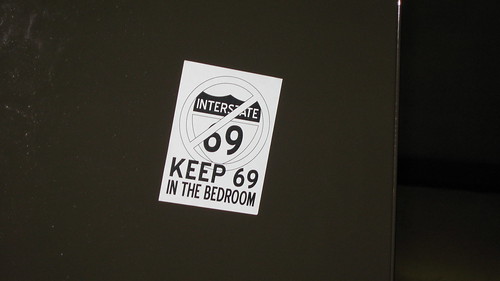 And I thought the posters for Crotch Rot were weird. I don’t get this one at all. I know there’s a real Interstate 69, but do we have something local going by the same name? Maybe this is just a cute protest sticker that’s made its way from a few states over. Or it could just be the 69 meme finding its way back around to me from Fredo and Shinichi.

Also, listening to the remake of “If I Never See Your Face Again” by Maroon 5 featuring Rihanna… anyone wanna give me a clue why they did this? It makes for a nice video, sure, but otherwise, I’m not gettin’ it. (Also, get your hands off Adam before I rip off that weave and scratch your eyes out, betch!) I’m definitely not a fan of “pure moneymaking” moves. Both Maroon 5 and Rihanna re-released deluxe edition cd/dvds of their albums. Sure their true/rabid fans will be happy to plunk down money for these as well, but I think it would be more fair if they got a freakin’ trade-in for their previous cds, since this is making those moot. Even software companies understand the need for the reduced-cost upgrade.