in DC: the migratory gays 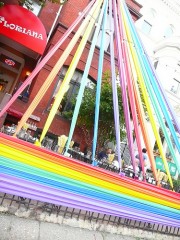 Interesting article in the Washington Business Journal reflecting the queer exodus from Dupont and surrounding areas. It talks to Dave Perruzza, owner of the primary 17th St bars, and David Franco, owner of Universal Gear that recently moved to a new location on 14th St.

At the time, Universal Gear’s owner, David Franco, told a local newspaper that Universal Gear’s departure would be the “nail in the coffin” for 17th Street. From his corporate offices just up 17th Street, Franco now says it was simply the right move. “We saw the eastward movement over the past five years,” Franco said.

“We used to know how well we were doing by the number of Safeway bags our customers would store behind the counter,” Franco said. “As time went on, we saw fewer and fewer Safeway bags, because people weren’t shopping there — they were shopping at Whole Foods.”

What’s interesting to me is that this article completely disregards what most people consider Dupont, as in the actual area around the metro stop and stretching down P Street towards Rock Creek Park. That area still does a fair amount of business, but aside from the dance club, it gets treated as “yesterday’s Dupont.” 17th Street was merely the first to benefit from a migration, and now they’re getting left behind as the gays keep moving.