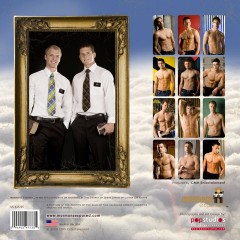 To be honest, it would be impossible to say that there’s no way he saw this one coming. Chad Hardy–creator of the Men on a Mission Calendar, featuring former Mormon missionaries posing bare-chested–has had his diploma held by Brigham Young University due to his excommunication from The Church of LDS.

Hardy’s excommunication for conduct unbecoming a church member was rooted in his failure to pay tithing, a lapse in other religious obligations and, according to Las Vegas regional church elder Frank E. Davie, his involvement with the 2008 “Men on a Mission” calendar.

Hardy says that the calendar is supposed to shake up stereotypes often associated with Mormons, that the purpose of his whole Mormons Exposed project is to be tongue-in-cheek. But when I look at some of the t-shirt designs available in his store… Again I say that there’s no way he couldn’t have seen this coming.

But at the least, I’m sure he’s made enough money from merchandise sales to cover his upcoming legal fight. Seriously though, collegiate honor codes–especially BYU’s which only recently clarified theirs on allowing homosexual students, “BYU will respond to homosexual behavior rather than to feelings or orientation”–are not to be trifled with.