And to top it all off, you get a sticker! 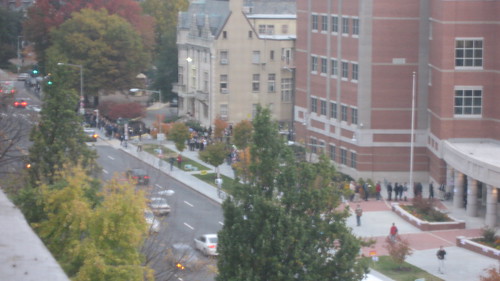 That may be one of the worst quality photos I’ve posted to my blog, but it doesn’t matter. That was the view of the polling place from my apartment window this morning around 7:30a after I got back from voting. I went out at around 6:15a, waited in line, did my thing and was outta there. I realize that if you didn’t get up early enough, or didn’t take off from work to go during the “less busy” times, you’re gonna have to wait, but it’s worth it.

There’s a pretty common sentiment going around the web these past few days and I agree with it: VOTE. And I say that as a former non-voting, apathetic, my vote doesn’t matter, things ain’t gonna change slacker. 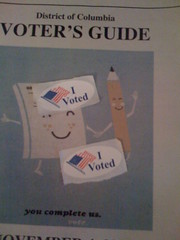 I won’t say that it doesn’t matter who you vote for, but I will say that I don’t care who you vote(d) for so long as you voted and took an active part in the process. I have always felt that it doesn’t matter how much money or influence you have, how many friends you have, your celebrity status, none of it, your vote is your business and frankly–it’s none of mine. I might be disappointed in your choice until I hear your reasons, but it’s still none of my business who you cast that ballot for. I’m fairly sure that if someone’s chosen candidate doesn’t win, they aren’t going to turn their back and say “Well to hell with the country. I’m moving to Canada.” Ok, they might say that, but I doubt we’ll see a mass exodus of soon-to-be expats.

Regardless of the outcome–which I am on pins and needles about–this is a very historic election for many reasons. Even more important to me than the first black presidential candidate with a shot at winning, is the voter awareness and turnout for this election. People are finally realizing that they have to do their part and give a damn about who’s leading us into the next four years.

I headed back home after the polls and changed to go to work. While I was waiting to cross the street, a man who had that “maybe homeless, maybe crazy, maybe not” look was trying to talk to a woman who was ignoring him in favor of her cell phone. I turned off my music and realized that he was asking about the line up the street at the polling place. I told him that people were lined up to vote today. He asked if he needed ID and I told him that he would need it and need to have registered. He genuinely seemed upset that he wouldn’t be able to vote today. I broke my personal rule and asked him who he wanted to vote for and he said Barack Obama. I let him know that in DC, there were plenty of registered voters that had his back.

It’s important, it matters, if you haven’t done so already–get out there and vote.