UI: touchy-feely is still fine by me 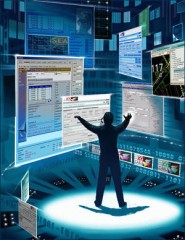 This all started with a shared item from Kris’ Google Reader: FluidTunes Controls iTunes by Your Waving Hand. It actually looks pretty cool, your MacBook’s camera picks up your movements in relation to certain controls on the screen and you can control iTunes. Like the reviewer says, “really cool but not sure I’d actually use it every day.”

Since I was still of a mind of Douglas Adams–really, when am I not?–I sent him the follow excerpt from The Hitchhiker’s Guide to the Galaxy:

A loud clatter of gunk music flooded through the Heart of Gold cabin as Zaphod searched the sub-etha radio wavebands for news of himself. The machine was rather difficult to operate. For years radios had been operated by means of pressing buttons and turning dials; then as the technology became more sophisticated the controls were made touch-sensitive — you merely had to brush the panels with your fingers; now all you had to do was wave your hand in the general direction of the components and hope. It saved a lot of muscular expenditure of course, but meant that you had to sit infuriatingly still if you wanted to keep listening to the same programme.

It’s a paragraph I always think of when people are thinking of new user interfaces that involve waving and swiping at items instead of just touching them. Yes, I know it makes your screen and/or buttons all fingerprint’y and gunky, but I like tactile feedback. Except for you Blackberry Storm, apparently ur doing it wrong from the reviews that I’m hearing.

I could see it happening, and that’s actually the most innocent scenario I could think of where errant/uncontrolled motions would cause problems with your files. He thought that statement was hilarious and deserving of an entry. As should be painfully obvious from my entries, I am a man that constantly seeks attention and approval. So I agreed and there you are.