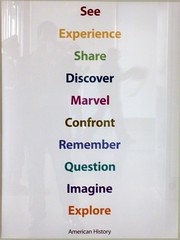 Since neither of us had been since the renovation, R and I headed over to the National Museum of American History. Even though it was a pretty chilly day out, it was fairly crowded, perhaps Inauguration leftover tourists. There were lines for exhibits that never have lines any other time of the year. The new entrance area from the Constitution Avenue side looks completely different, very “white box” with many interesting items lining the walls, though most people flocked over to see C-3PO.

Once you get past the entrance areas, not too much is different than it was before. We stopped through to see Julia’s Kitchen of course and then looked around at the other popular exhibits. First Ladies: long line. American Presidents: long line. Thanks for the Memories: long line. We did get in line to see the Star-Spangled Banner and the new installation for it is very cool, but after that we only wandered through the, I guess, less popular exhibits on electricity and transportation. 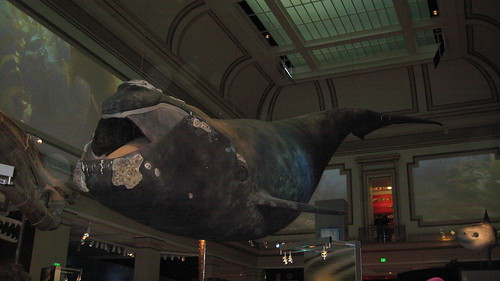 Since it was right next door, we headed to Natural History and got to see the new Sant Ocean Hall and wandered through the big dinosaur room. Natural History didn’t feel as crowded as American, but that might be due to the exhibit layout, there’s a much more natural flow to get from room to room. American is really split between the East and West sides, so it’s hard to just wander through, but at least I got to see Stephen Colbert’s recursive portrait.

Truth be told, it was a little chilly to be out and about yesterday, and your only option becomes going out to go back in, but a trip to the museums is always a fun one. We grabbed an early dinner at Gordon Biersch which was pretty yummy and very filling. I even broke my usual “I don’t drink beer” rule and had their Hefeweizen, which went well with the Steak Frites–though that dish came with way too many fries. My first experience trying GB wasn’t so great, so I’m glad that it was an isolated incident as the service and food were great.

We’re starting to enter those days of Winter where it’s all too easy to go stir crazy because it’s just too cold to go out. So it’s nice to have a few free entertainment options around town that don’t demand much spending money. Walking around downtown, however, made me really ready for Springtime! Someone remind me why human beings aren’t allowed to hibernate?