video: you cannot unfriend it 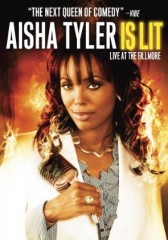 I have become an absolute Aisha Tyler fanboy lately. I saw her special Aisha Tyler is Lit on Comedy Central and it was hilarious! Sadly it only aired two times that I could find, but after following her on twitter @aishatyler, she mentioned it would be on DVD the following week. Hello, pre-order!

I’d seen her in Balls of Fury and heard her in The Boondocks, but the other shows she’s been on were not on my radar. Even so, I saw a teaser for the special and she was wearing the “I can kick your ass at Halo” t-shirt. From that point, I knew TiVo needed to record it!

I’m thinking of changing my ringtone to Sweaty Balls! She’s coming to DC in April and I am definitely going to have to see that show.

Amazon has Aisha Tyler is Lit available both on DVD and for purchase or rental withvideo on demand. I don’t know if Comedy Central will air their heavily edited version again, but if they do, order your DVR to nab it. Or if you’re local, you can borrow my DVD… maybe. 😈