in DC: gorgeous day for an evacuation

So that was my afternoon from about lunchtime until a few minutes ago. How was yours?

Betsy and I took off to Five Guys for lunch and on our way back we saw police cars, ambulances and fire trucks in the area. Before leaving, our building’s atrium looked like someone had a “grilling incident” in the cafeteria. Lots of smoke in the air and it smelled like a whole lotta cooking had been going on–and we’re on the 5th floor. No fire alarms were going off, so we didn’t think too much of it. But when I saw one of the vehicles was specifically a Hazmat vehicle, I knew we were in for a long afternoon. 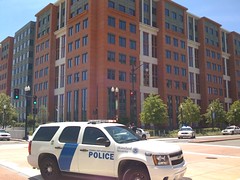 It isn’t the first time we’ve been evacuated from the building for a more serious incident than a fire, but people were obviously caught unawares by it. Many a bag, set of house or car keys, etc. were left inside. After about 2 hours we were told we could leave, but the building remained closed for the time being, so some people were stuck there for, I hope, only a little while longer. As I had my wallet, keys, phone and shades on me, I headed home via metro. I imagine the office resembles a scene from Life After People–computers and lights still on, bags lying around. There was the usual groaning from people about being stuck there, but I think a few hours of inconvenience is better than the alternative!

Though I do wonder if it’s a sign of getting older that I felt annoyed by being evacuated. There was the standard annoyance of “Tell us what’s happening or let us go home,” but even beyond that… I had work that needed doing. Now it’s 70s and Sunny out and all I can think about is getting back inside to finish what I was working on. Yeah… something’s definitely wrong with my brain! 🙄

Also, say what you like about twitter, but today it was a much faster source of information than the Federal Safety Monitors. I sent a note out asking what was up and the lovely and talented @mazzie*, connected me to @dcfireems. I had my updates well before they’d purple monkey dishwasher’d through the crowd. It didn’t help much in terms of knowing how long things would take, but it cleared up exactly what the incident was and gave us an idea of what was happening. Between twitter, brightkite and Facebook, I felt like an on-site mini-news reporter, tweetin’ the updates!