An abbreviation offered up by one of the writers over at Capital Spice, though they admit it could use some work.

Last night was the 3rd DC Food Blogger Happy Hour this year, at The Black Squirrel in Adams Morgan. I am normally not a networking event type of person, and living in DC just about any happy hour turns into one, but this time was different. My blogging cred isn’t unknown, but this food blog is extremely new and I wasn’t really in the mood to try and pimp it. I was just looking forward to spending time with some local foodies–and getting out of the house for the evening! Mission Accomplished. 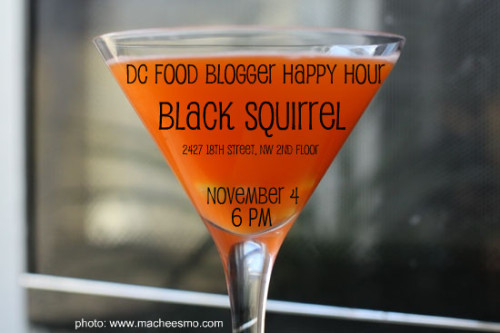 It was planned/arranged by the wonderful people behind: The Arugula Files, Modern Domestic, Gradually Greener, Capital Spice, Capital Cooking, & Beer Spotter. I don’t know that I met them all last night, but there will be other chances in the future to make up for that. I mostly hung out in an alcove with Adventures in Shaw, Florida Girl in DC, and Stop the POTA. Also ended up seeing Restaurant Refugee, Liv It, Luv It, Pete Bakes, The Bitten Word and Passion Fruits. If I met anyone else, I may have gotten your name, but not your blog name… sorry!

The venue was a great choice, definitely a step above “bar food”. Farm fresh ingredients, plenty of vegetarian options and the “Addictive Mac & Cheese” definitely lived up to its name. The foodies were in sharing mode as I got bites of the Hereford beef burgers (meat ground on the premises, of course), roasted vegetables with gruyère, and calamari & sugar snaps. We all split the desserts, made that day: crème brûlée, banana bread pudding and apple turnovers. Everything very tasty and very filling, and genuinely so, not just letting grease and batter fill you up as you might do in most bars.

In addition to the eats, they had a huge selection of beers and beer cocktails. I tried one called The Devil–Lucifer Pale Ale, Tanqueray, Grenadine, Lemon $9 in a pint glass–and it was quite liable to knock me on my ass had I not added some food to my stomach. So naturally once I’d eaten something… I had one more. I’m not usually one for beer, but a cocktail of beer and liquor seems to ignore the “never sicker” saying as I was fine this morning… if a little more sleepy than usual.

The Black Squirrel is definitely an Adams Morgan place that doesn’t feel very Adams Morgan, but I think they’ll do well there. Friendly staff, reasonably priced and each floor has good window space for people watching. Though the upstairs did get a little bottlenecked around the bar area. Not quite an upscale venue, but definitely not a dive either. Aside from the weekly half-price specials on appetizers, wine bottles and hamburgers there were no happy hour specials offered. So that doesn’t make it my first choice for a regular after-work happy hour spot, but it would certainly do as the place you grab a bite and a final cocktail after happy hour is over.