No, this post isn’t about the song, but it is related to questions posed by the song. Tim Wise wrote this post a few days ago and it has since gone viral around both Facebook and the Web-at-large. It proposes a thought experiment:

Let’s play a game, shall we? The name of the game is called “Imagine.” The way it’s played is simple: we’ll envision recent happenings in the news, but then change them up a bit. Instead of envisioning white people as the main actors in the scenes we’ll conjure—the ones who are driving the action—we’ll envision black folks or other people of color instead. The object of the game is to imagine the public reaction to the events or incidents, if the main actors were of color, rather than white. Whoever gains the most insight into the workings of race in America, at the end of the game, wins.

He goes on to frame many events of the past few weeks, months and years asking us to imagine that the people who said or did various things were black instead of white. It’s interesting because it’s where what should be runs into direct conflict with what is. I think of the comparison in portrayals of the past few years’ demonstrations (or protests, if you like) that took the form of marches in Washington, D.C. by those either in the minority or majority depending on the cause to the more recent Tea Party demonstrations. 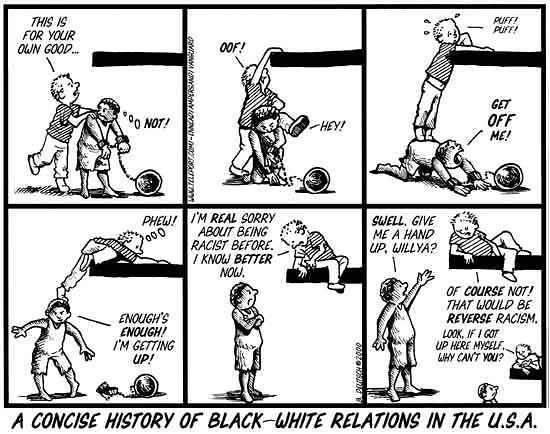 I encourage you to read the entire essay, because no matter what side of the issues you may be on, the experiment is about race and our reactions as a society to it, not necessarily politics–though unfortunately those lines do seem to be blurring more than they should, especially lately. His closing underlines something that many people fail to see or understand about white privilege:

And this, my friends, is what white privilege is all about. The ability to threaten others, to engage in violent and incendiary rhetoric without consequence, to be viewed as patriotic and normal no matter what you do, and never to be feared and despised as people of color would be, if they tried to get away with half the shit we do, on a daily basis.

I’m not saying that not thinking about or noticing this makes anyone a bad person. But like many other opportunities for introspection and personal improvement, thinking and talking about it may put someone on a path to becoming a better person. Feel free to share your views in the comments, or write about it yourself but fair warning if you choose to make comment here: keep it civil. I’ve already had to report a racist comment on one of my YouTube videos this past week, so I’m not in the mood and the banhammer is ready to strike.