No… I’m not making that up. It’s the front page of today’s Maryland, Virginia and Washington DC editions of The Examiner. Really!

Note that superb photo of him lifted from YouTube. I was going to just snap a photo of the free paper in the box, but it was a bit crinkled and then I looked over at the man handing out the Examiners to commuters–a black man. I have told similar employees in the past that I don’t want a copy because they hate Obama. I’m usually met with either blank stares or that old Flintstone’s adage, “It’s a living.”

Note that if you read the online version, the article title is Obama’s election year pitch leaves out white males. I’ve kept a PDF copy of the front page and inner story for download because they’re just so awesome! 🙄

It’s not like I’m completely shocked, The Examiner has always displayed an extremely conservative bent even though it and its counterpart Express are more or less tabloid papers. But while Express is often what I call “yesterday’s news”* carrying stories from the wires, Examiner is a lot more “correspondent”-written articles, the one above was written by their “White House Correspondent”. 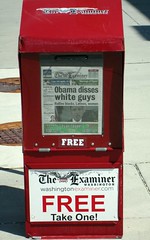 I’m not saying that the oddly highlighted fact in the headline is wrong, per se. President Obama is rallying his base, the voters that gave him the most support in 2008–“young people, African-Americans, Latinos and women.” What politician and/or past president hasn’t done the same thing? Hell, what politically-motivated figure today isn’t doing the same thing? One person’s rallying is another person’s pandering, same effect.

But you can’t tell me that it would have been considered ok to print such a headline during any previous administration saying that the president is “giving up” on a segment of the population. Even if it may have been true, the very notion seems ridiculous.

And no… my blog isn’t “gettin’ all racial up in here” but I do feel the need to call out idiocy when I see it. It does, however, remind me of an article from The Onion in 2008, Obama Modifies ‘Yes We Can’ Message To Exclude Area Loser

“I have always said that the change we seek will not come easy, that it will not come without its share of sacrifice and struggle,” Obama continued. “And the last thing we need is dead weight like Nate Walsh adding another 20 or 30 years to the process.”

So maybe The Examiner will step forward and say that they were just kidding and didn’t mean anything by it. They’ll then follow that with a press release stating a change in format to a satirical conservative free daily along the lines of The Colbert Report… right? Yeah, right.

By the way Examiner, “disses”? Y’all are so street.

* Because if you’re paying attention to twitter and social media, you often know what’s going on in the world at a speed that is impossible for print media to keep up with.