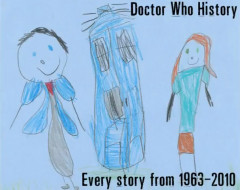 Still, when someone takes it upon themselves to do a proper video montage of all Doctor Who stories from the very beginning up to nearly present day… and it’s good, I gotta give them their props. Clocking in at just over 38 minutes, it chooses some good music, good sound clips and good video snippets and covers every episode–including special episodes, tv show appearances, one-offs, video games and radio plays–up through Season 5 of the re-imagined*** series.

And if you really need a “current series” fix, reddit user AndorianBlues has come up with a speculative chart of the timelines of River Song and The Doctor:

Through dialogue, the show has established first that Professor (Doctor?) River Song and The Doctor keep meeting “in the wrong order” and more recently implied that they keep meeting backwards, more or less. It makes River’s character more interesting, but also in danger of becoming a plot device because if every adventure is in her past, it removes a bit of tension from the dramatic plot. Even if “time can be re-written” it’s a good bet that the future/past of their courtship won’t be… or will it? 😛

In the meantime, it’s all good fun. Before the current series aired, I’ve been catching up my other half on the entire 2005-forward run, so having to wait a whole week between new episodes now is painful. We’ve resorted to starting up my Mad Men discs just so we’ll have a series to watch–and catch up on–every night!

** Not that there’s anything wrong with that!