in DC: America I AM

Growing up in the south, and being from the only black kid to one of the very few black kids in school, my view of Black History Month each February was pretty much the same. As comedienne Aisha Tyler said in her comedy special, “During Black History Month, I was the exhibit.”* Every year, we heard about the same people, same accomplishments and same historical events. It’s hard to lay the blame at the feet of the Georgia public school system, it had barely existed by the time I was starting grade school. I’d turn out a report on George Washington Carver for school and visit The King Center with Jack and Jill and that was pretty much it until the next year. It wasn’t until high school that more information was folded into the annual “curriculum” and generally my parents made sure I knew more than was mentioned in the classroom. Even so, after a while, Black History Month tended to wear on one. We were still a ways off from the proliferation of the Internet and the furthest reaching television shows about it were either PBS specials or The Cosby Show. All people should be aware of their cultural heritage, but hearing the same stuff year after year isn’t interesting, it’s just repetition. 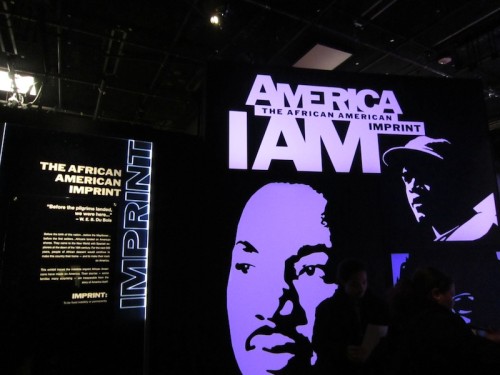 Flash forward through the last few decades and it’s obvious that blacks in America don’t need a month of history and cultural awareness to reaffirm their place in this country. Whether hopping on internet ancestry sites, turning on the radio, heading out the movies or watching shows like “Who Do You Think You Are?”** there can be no question of the contributions of blacks–and other minorities–towards making our nation what it is. Still, just when I thought there wouldn’t be another Black/African-American cultural exhibit that would have anything “new”, I was invited with other DC bloggers to attend a special showing of America I AM: The African American Imprint a touring exhibit currently at the National Geographic Museum in downtown Washington, DC. 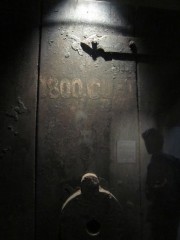 Filled with poignant artifacts showcasing nearly 500 years of history, “America I AM” celebrates the imprint African Americans have had on the United States. Visitors will see objects ranging from shackles used in the slave trade to abolitionist material and the poetry of Langston Hughes. Personal items from contemporary African American figures such as Serena Williams, Michael Jordan and Prince will be on display. An interactive area will allow visitors to leave video “imprints” of their own experiences, a collection that continues to grow throughout the tour.

There were definitely items in this exhibit that I hadn’t seen the like before in other African or African-American museum showings. It’s spaced out into 12 galleries that range from history in Africa, to slavery and emancipation, military service, religion, the civil rights struggle, politics and the more recognizable icons of entertainment culminating in a multimedia presentation that focuses on both our struggles and our influence. 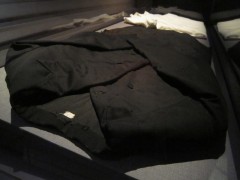 The opening sections of the exhibit can be emotionally heavy, to say the least. Seeing–and walking through–the Door of No Return while listening to an audio recording emulating enslaved Africans in Cape Coast Castle and on ships, then proceeding to see physical artifacts of slavery in America is definitely educational, but the longer I stood there, taking in the exhibits and taking photographs, I had to move along. Actually seeing the whips and chains, reading census and tax documents counting a slave as 3⁄5 of a person… it makes what sounds like what should just be a nightmare from the past all too real.

Thankfully, the exhibit does move along to–moderately–happier times, however and contains items from black troops and brigades in the revolutionary war, the spread of anti-slavery literature and even records of “conductors” along the Underground Railroad. There are materials containing depictions of blacks in advertising across from pennants and uniforms from the Negro League baseball teams. In the same room as a KKK klansman’s robe are items from historically black colleges and universities, including the charter of the first (Alpha) chapter of ΑΦΑ. Some of the juxtaposed items in the exhibit must have been on purpose, because as much anger as one can feel looking at an example of hate and ignorance, you only have to turn around to see an equally important example of knowledge and learning. 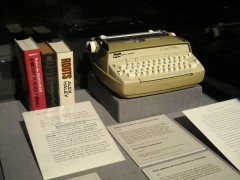 The exhibit’s galleries continue on to the civil rights movement, with some pretty fascinating contributions, including Rosa Parks’ fingerprint card from her arrest in 1955 and the jail key and bench from Dr. King’s cell in Birmingham, Alabama in 1963. More surprising–to me–was seeing materials and buttons from Shirley Chisholm’s presidential campaign in 1972. The range of resources and donors of items to the exhibit was pretty impressive.

I’m not sure if this is a concession to the potential younger visitors, but the exhibit “ends” on a note more rooted in pop-culture, but still important. Items and clothing from sports and music personalities may not have quite the same impact on viewers, but they are infinitely more recognizable. Outfits from athletes Michael Jordan, Serena Williams and Muhammad Ali. Stage outfits worn by musical acts from Jimi Hendrix to Ray Charles… to Bootsy Collins. A personal favorite was Alex Haley’s typewriter that he used to write Roots. Also amusing was the letter to Berry Gordy of Motown Records confirming that the members of the Jackson 5 were attending school.

I could go on, but there’s really not much more to say except that America I AM is worth seeing. It will be at National Geographic until May 1, 2011, so there’s plenty of time to catch it. Additionally, National Geographic will be hosting exhibit-related events–films, music, dance and a childrens reading program–February through April. See their press release for more details.

I thoroughly enjoyed the exhibit and will likely be back when DC warms up a bit more. I expect it to be pretty crowded in February due to school trips, so it might be wise to wait until Springtime to visit. Just be sure to give yourself plenty of time, we spent nearly two hours and that was at a relatively quick pace. Even if you’re like me and feel a bit jaded by Black History Month events and exhibits, I promise you that this is something new.***

* She continues in the voice of her teacher, “Here we have the Negro in her natural habitat. She’s gonna tell us all about her people! And then we’re gonna touch her hair…” If you haven’t seen the special–which I’ve blogged about multiple times–you really should.