Since making the switch to a car-free lifestyle, the one odd thing I noticed most in conversation is how much I don’t hear what’s on the radio anymore. Co-workers will come in telling me of morning shows or ads and I just give a blank stare. Conversely when I mention music, artists and albums, I get similar stares. Not because they haven’t heard the songs, but because in many cases they tune out the announcer telling them the details–which was what I always listened for. I’m a music nerd like that.

Internet radio is about the best thing ever, for me. Not only do the stations display a huge amount of both variety and in some, a very strange specificity1, but if streaming sites and radio stations hadn’t gotten the ball rolling, the newer–and far more popular–customizable services never would have taken off. There is definitely a “Top 5” of services and after trying out all of them, I’m pretty much stuck on Pandora as the go-to internet radio station in The Swanktuary.

While it does suffer from The Coldplay Paradox2–as do other services–it wins out for one big reason: obscurity. My iTunes library is HUGE for one reason, most of the cds ripped can’t be found today and certainly won’t be heard today. So when I hear a one-hit-club/dance-wonder track3 on Pandora and am able to generate a station around that one song which pulls in other appropriate songs, I’m definitely won over. And thanks to the Music Genome Project, a station just feels consistent over time. A dance music station will maintain the energy and BPM while a lounge station will put me at ease and make it easy to wind down in the evening.

Still, no service is perfect and in the past they haven’t always had a very wide selection of Christmas stations. The ones they had were good, but I still found myself customizing my own. There’s a very limited window that I really get into Christmas, so I like to hear the tunes that will keep me full of seasonal cheer and not turn me off. Well this year I think they’ve really stepped their game up with 17 genre based Christmas/Holiday stations. I can easily switch from classical, to swingin’/lounge/jazz, to one of my surprising favorites: electronic/ambient as noted a few years ago. I find that it makes for great background music to have some friends over, watch the Fireplace DVD and make a big ol’ batch of egg nog and mulled cider for the sharing. 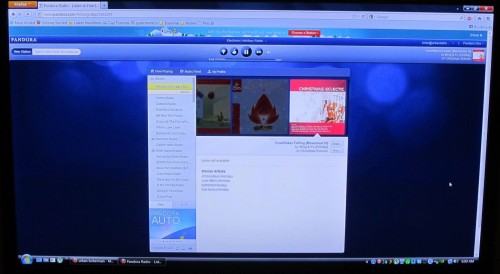 I would say that the only real drawback is that there is no full screen or “party mode” interface. I’d like it more if I was able to turn on something similar to iTunes’ Visualizer. However I can see where that might cause a problem because like any other station, Pandora not only has ads–which tend to be far less intrusive than broadcast radio ads and a little more tailored towards internet-savvy consumers–but they also have a periodic check for free listeners a.k.a. “Are you still listening?” It’s amusing at times, but having the music cut out in the middle of your get-together while you find the mouse & click the button could get awkward.

To get around that, you could upgrade to Pandora One for $36 a year, less than most of us spend at Starbucks–ok, definitely less than I spend there. With that you get ad-free listening and 5 hours of uninterrupted listening time before you have to interact with the site. Plenty of time to make a few clicks before company arrives and perhaps another click or two on your way to the kitchen to serve up more cocktails and nibbles.

And speaking of party tunes, while not yet live, Pandora is framing themselves as the virtual DJ for your New Year’s celebrations with a special 2011 New Years Eve Party station as well as eleven genre-based stations playing popular and chart-topping tracks from 2011. Starting next Tuesday, December 20 through January 31 look for the 2011 stations at http://www.pandora.com/#!/genres/end_of_year4.

2011 New Years Eve Party – Create the perfect playlist to ring in 2012 with this New Years Eve Party mix including some of the biggest hits of the year plus Rock, Pop and Dance classics from artists like LMFAO, David Guetta, Rihanna, Brittany Spears, Katy Perry and more.

2011 Top Adult Hits – Hear the biggest songs from the hottest Adult Contemporary artists that hit the charts in 2011 like Adele, Maroon 5, Pink, Coldplay and The Band Perry.

2011 Top Alternative Rock Hits – Turn on a great mix of Alternative and Rock songs from the biggest selling albums of the year by artists like Foo Fighters, Staind, Foster the People and Red Hot Chili Peppers

2011 Top Christian Hits – Enjoy hits from the most popular Christian artists of 2011, including Aaron Shust, Mercy Me, Chris Tomlin and Steve Curtis Chapman

2011 Top Hip Hop and Pop Hits – The 2011 charts were full of surprises, including great new artists, duets and hot summer songs from artists like Rihanna, Katy Perry, Drake and LMFAO.

2011 Top Jazz – Experience selections from the top Jazz releases from 2011 including tracks from artists like Boney James, George Benson and Charlie Haden in addition to the first number one album from Tony Bennett, who has been recording since 1950

2011 Latin Hits – Play some of the biggest Regional Mexican and Spanish Contemporary songs that dominated the charts for 2011 from artists like Gerardo Ortiz, Intocable, Espinoza Paz and Mana

2011 Top Pop Hits – A fantastic station full of the Top 40 hits of 2011 that feature the hottest Dance, Rock and Pop songs of the year from artists like David Guetta, Britney Spears, Cobra Starship and Foster the People

About the only thing missing is a 2011 Mashups Station, but hopefully DJ Earworm will release another United States of Pop mix for 2011 soon. But right now I’ve got Electronic Holidays playing in the office and am feeling mellow. Bring it on, Friday!

Disclosure: I was given a free Pandora One account to use while evaluating the holiday stations but the stated opinions about the service are my own.

1 Seriously, there was a time I only wanted to hear the dance & house music I heard going out in the clubs between 1990 and 1993 and was able to find a station that veered off course by perhaps one song every few hours. Very. Strange. Specificity.

2 When a Coldplay song appears on a station and you make the mistake of giving it a heart or a thumbs up, Coldplay will somehow spread to all of your other stations regardless of genre or era. The countless “Why is Coldplay showing up on my _____ station?” tweets will attest to this.

5 I have no idea what that means in terms of shopping–and shipping–days, but y’know, don’t procrastinate and all that.