the Lorax: I speak for the SUVs?!

I don’t use the horrible hyperbole of “raping my childhood”1 that too may are willing to throw at just about anything that doesn’t respect their very specific and unwavering nostalgic vision of something they loved when they were a kid. That said, I’m still pretty critical of remakes, re-imaginings and in the case of Star Wars… remixes of the entertainment properties of my youth. I think it mostly stems from being initially excited about reliving those feelings of childhood wonder and then immediately being disappointed when you see what the new final product will look like.2 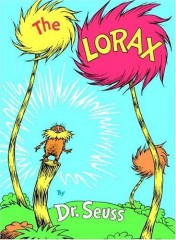 Being a geek, I love a lot of toys, cartoons, tv series, comic books, etc. and after seeing enough of them remade–horribly–I’ve resigned myself to the fact that it’s not about preserving the artistic or entertainment value of the original properties, it’s about making a buck and marketing to the current/next generation of consumers. That said, even I bristle at the marketing tie-ins for the upcoming movie version of Dr. Seuss’ “The Lorax”.

Written in 1971 and adapted for television in 1972, the story has been both praised and denounced for its environmental messages. The character of The Lorax may be a grumpy environmentalist, but speaking up for “nature” which cannot defend itself is something that’s easy to relate to, even for kids. And while I don’t plan to watch the remake, I did recently re-watch the original special and find some of the sponsors and products a bit odd considering the story’s material.

Most notably is Mazda’s new CX-5 “crossover” SUV which is admittedly more eco-friendly than the traditional SUV–smaller body, better technology–but is it the most eco-friendly car one could drive?3 Better question, if The Lorax saw a bunch of these vehicles lined up–as in the novel and tv special–to buy a bunch of Thneeds from the dwindling Truffula tree forest… would he be happy? Would he permit the Truffula trees to give it their Seal of Approval?

Considering how distressing it was that the Once-Ler would create first a drive-through and then demand the forest be paved over to develop a four-lane highway… would The Lorax perhaps instead suggest that you enjoy the splendor of the forest on foot or a bike?

Other sponsors such as Whole Foods, Seventh Generation, HP and Stonyfield Yogurt don’t seem quite so bad unless you remember that they’re not really (necessarily?) trying to push environmental ideals so much as they’re trying fulfill the co-branding obligation to push people into movie theaters. The message isn’t to rent the DVD from Netflix or borrow the book at your library, it’s “Go see The Lorax, playing in theaters now!”

And then there’s IHOP… which just seems weird.

IHOP is rolling out a movie-inspired, limited time menu for guests of all ages, featuring The Lorax’s Breakfast, Pipsqueak’s Breakfast, or Mac ‘N Cheese & Truffula Trees.

The seed paper bookmark is a nice touch but I’m not sure about calling rainbow sprinkles “Truffula Chips” and broccoli florets “Truffula Trees”. And especially a “Rooty Tooty Bar-Ba-Looty Cone Cake” when the point of the book was that the Bar-Ba-Loots no longer had anything nutritious to eat, so naming a pancake and blueberries stuffed into a waffle cone after them doesn’t really seem on message.

That’s marketing for ya! It doesn’t have to make sense so long as the branding is memorable. And in response to the Once-Ler’s argument, I wouldn’t want to see anyone at these ad firms lose their jobs to stem the tide of the tie-ins, but don’t blame me for thinking that it’s a bit much. I have no doubt the movie will be a box office success and I’m glad to see Danny DeVito getting the work, but I’ll still wait for this to hit cable or Netflix while I tap through the pages of my e-book copies of Dr. Seuss’ works.4

1 And neither should you, I don’t care what message board you’re trying to use to express your “outrage”. It makes you look like an insensitive myopic troll.

2 Transformers… I’m mostly looking at you.

3 To my knowledge, there is no such thing yet as a total-zero-emissions car from a big picture perspective, so that’s not really an argument I can get into here.

4 To quote Popeye from Archer, “Goin’ green up in here.”