Informed fellow commuter his fly was undone. Does that count as my good deed for the day? #fb

The man was–more or less–a stranger, but also a stranger that one could call an acquaintance in that you see them on your commute at least 4 times a week. As a quick reply noted, I shouldn’t be eye-ing other commuters’ crotches, but I honestly wasn’t. I was seated, they were standing and as anyone who’s sat in an aisle seat during a busy stretch of metro knows, you keep your eyes straight forward or on your book/device while you dodge backpacks and avoid looking directly at a stranger’s crotchal area.

So yes, a stranger, but a stranger that I know gets on at L’Enfant Plaza and exits with me at Navy Yard. I remember thinking it was odd because he was wearing jeans on a Wednesday–rather than the usual Federal Friday dress down code–and unfortunately, jeans are not forgiving if you don’t zip ’em up. They love to bow out and announce to the world that you were just a wee bit absent-minded that morning.

I thought, “It’ll be weird if I tell him, I won’t say anything.” and let it go through one station stop. Then I thought, “It’s better if I, a near-stranger, tell him than a co-worker sees it and tells him.” So I stood up, grabbed the standee-pole nearest him and casually–if that even applies here–said “Excuse me sir,” as if he’d just dropped something. When he acknowledged eye contact, I mouthed more than said, “Your fly is undone.” The train wasn’t packed and the noise of the car covered it. His face flushed as he quickly corrected the… oversight and said thanks. I awkwardly nodded and reverted to “I don’t know you at all, fellow commuter!” mode. 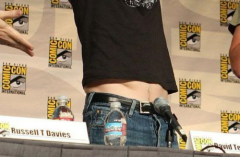 Was that the right thing to do? Should I have ignored it? What would you have done? I tell co-workers all the time that they need to make a vital adjustment whether it’s an XYZ call, their tags are out or in more than one co-worker’s case, that their garment is on inside-out. It isn’t to make fun of them, it’s more in the hope that they’d do the same were the situation reversed.

So what is the etiquette of breaking a delicate–but not tragic–situation to a stranger assuming you aren’t a member of the hospitality industry?

I’ve seen the guy on the train since then and there’s been the usual lack of acknowledgement of each others’ existence, which is fine by me. He’s not the type I’d cruise, even subtly, and I wasn’t expecting a lifelong friendship to blossom from some random dude’s zipper being down.1 Washington, D.C. was recently ranked America’s 3rd rudest city in a survey by Travel & Leisure, so maybe I should have ignored it, but I still think a little do unto others is called for, even when it might get kinda… weird. 😛

1 Then again, I’ve known couples who’ve been together for years whose “How we met…” stories begin in a strikingly similar fashion.