And now, for something completely different… for 1995 anyway.

Guinness made the above ad featuring a co-habitating gay couple, via agency Ogilvy & Mather in 1995, but an anti-gay backlash kept the spot from ever airing, unsurprisingly. It’s been making the rounds again for a few weeks and has shown up on a few “best gay ads” lists, which is weird considering it was never aired. More recently it’s been called “steamy” which, aside from the one scene of the spouse in the bathtub, doesn’t really convey. In my opinion?

@sean808080 I was going to blog the ad tomorrow. I would not call it steamy. More like the most realistic portrayal of relationships… ever.

Because even in that 60-second ad, I saw shades of past relationships including my most recent which, as I already mentioned, ended just over two months ago. To sum it up most simply and borrow from the Diana Dors quote in the ad, we were “different animals”.

For the most part, I’m not angry at him, tho from time to time I’ll remember something he did that drove me up the wall and either grimace or laugh about it. Mostly I’m upset that things didn’t work out because they seemed to be going well, but I suppose that’s always how a relationship feels when you’re in one. You’re able to ignore the minor issues and squabbles, but what I couldn’t ignore was that we kept coming to the same argument over and over and while we could slap some duct tape over things for a while, we’d arrive at the same point again. It was honestly more mature to end things when we did than to continue going round and round in the same cycle.

However, realizing how “mature” it was doesn’t keep me from feeling like a failure. I thought–obviously–that this was “it”. Barring maybe 2 or 3 years with a (or many) roommate, I’ve mostly lived on my own in DC. Dating and relationships were always possibilities, but I never saw co-habitation as one until this time, though it mostly worked out because he has no stuff.1 Even so, moving together into a larger space means you buy more things, unfortunately moving out means you still have those things. It’s been maybe three weeks since I got all my stuff in the new place, much of it isn’t unpacked partly from laziness but mostly because I’m just staring around at this new place where all my crap doesn’t fit and at times it seems like an apt metaphor. 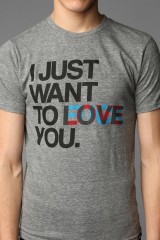 Still, I’m an adult and he’s an adult, we’ll move on, maybe even be able to talk to each other again someday. Lesson learned, right? It was love, I have no doubt of that, and cheesy as the cliche is, it does mean that I have the capacity for that again–perhaps just not right away.

The interesting thing is getting used to doing things on my own again. Stuff I never had a problem doing by myself when there was no other option doesn’t quite appeal to me as much. Going out for a meal or a drink on my own definitely feels sadder right now and I am really not looking forward to the winter holidays but we’ll have to see what the new year brings. Single and ready to mingle, right? …or something like that, anyway. It isn’t my first time dealing with a breakup, I’ve been here before, although in the past I had a slightly larger network of friends to support me but life goes on.2

Am I really all maturity and philosophy and looking toward the future right now? Hell no, but there’s only so much one should be willing to write publicly on the internet. While I may not be blameless, I’m also not going to be labeled “the bad guy”. The long and short of it is, while we cared very much for each other, we both wanted different things and the former can only placate the latter for so long.

Anyway, Happy Hump Day everyone and a very happy birthday to Russell Tovey for reasons that are completely unrelated to his being absolutely adorable.

1 Seriously, he’s a minimalist and a very good one. Just about everything he owns could be put into a suitcase and wheeled away.