#IStandWithAhmed because a 14-year old student bringing a homemade clock to school to show their teacher should be encouraged, not feared.

All of these stories come across as Charming and Nostalgic tales of a nerdy little kid on his way to a predestined career in science, math, or technology. There was never any negative fallout. Yes, partly because it was more than a decade before 9/11.

But they’re happy stories mostly because I was a white Catholic kid named Andy Ihnatko. Not a brown kid named Ahmed Mohamed, and not a black kid named anything.

My stories about being a nerdy schoolkid all have good endings. My teachers took all of these things as signs that I had a lot of potential — it helped that I was not just white, but a white boy — and they responded by supporting and encouraging me. 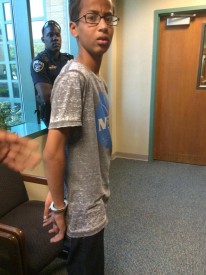 If you aren’t aware of what happened, high school student Ahmed Mohamed brought a homemade clock to school to show and hopefully impress his engineering teacher. Trying to get the year off to a good start. The clock was seen by another teacher who said it looked “like a bomb” and later the police were notified.

Regardless of the fact that he repeatedly said it was a clock, by that afternoon, he was being led out of school in handcuffs. Because of this, he’s vowed never to take an invention to school again.

I went to school with kids–ok white kids… ok white boys–who would bring in all manner of tools and other things that could be used or seen as weapons. They might proudly show off their lockpicking skills, or dismantle electronics during class and no one batted an eye. It’s just a disgrace and while it seemed, for a moment, on 9/11 as though we’d been brought together as a nation and common people, ever since then we’ve allowed ourselves to become so divided and mistrustful.

Both of these photos were taken in Texas. Let that sink in for a moment. #IStandWithAhmed pic.twitter.com/NQCZ9rW2lw

No, we can’t say for certain that the same thing might not happen if Ahmed were white with a non-Muslim name, but let’s face it… we’re pretty damn sure it wouldn’t.