Chicken and Waffles at Woodward Table

While the origins of chicken and waffles seem to be divided between the North and the South, I still suppose it was surprising that I had never really had them until moving to DC which seems firmly entrenched between the two, culturally. 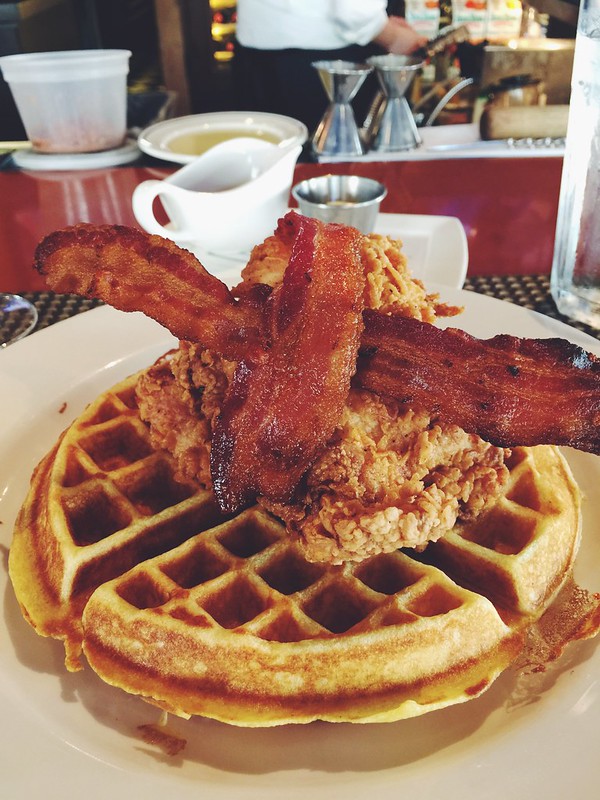 I don’t often like to mix my savory with my sweet, and most of the places I’d order chicken and waffles from would give you a small amount of chicken and half a waffle and syrup that wasn’t all that good. So when I tried Woodward Table‘s version, I was skeptical, even though no dish there had ever steered me wrong. And it turns out, I needn’t have been worried.

A full waffle, topped with two pieces of fried chicken (breast meat, but they clearly marinate/brine it, it’s very moist and flavorful) and two pieces of bacon. Because honestly, what is a brunch dish without bacon?1

I can’t get it every time, because maple syrup paired with bottomless mimosas is almost too much sweet (and alcohol + sugar) for me for one morning, but when I’m stumped for a choice, I definitely gravitate towards it.

As today is my birthday, I won’t be heading to Woodward, instead spending it at Medium Rare for one of my usual epic bottomless brunches, but I make it back there about once every other month or so2 and the chicken and waffles are hard to resist every single time.

2 Being a regular restaurant patron takes discipline, scheduling, and in the case of bottomless brunches… fortitude.