Spotted these balloons a few days ago in the Columbia Heights metro station. I’d like to hope that they were for a birthday and happened to be someone’s favorite colors, but I know better. 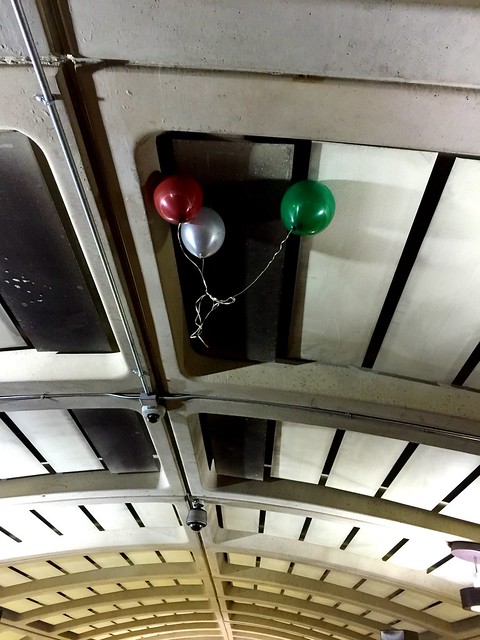 Those. Are. Christmas. Balloons. You know it, I know it, and the unfortunate person who let go of them knows it. BAH (NO HUMBUG BECAUSE IT IS TOO SOON)!

In other news, I have been late a few days in the past week or so for work. Admittedly “late” for me is getting in at 7:30 or 8 instead of 7. So, not really late, but still late. This morning I was having a hard time getting up because of a weird thing in my dreams that very rarely happens.

In my dream, I was going to bed. In the real world, my alarm was about to go off. When it did, I woke up initially feeling like I hadn’t slept a wink, hit snooze and went back to sleep. But then in my dream, I got up and started getting ready for work. If it hadn’t been for the particular setting in my dream which was a mix of the house I grew up in and every subsequent apartment since then, I guess I could have kept on sleeping–I have slept through alarms plenty of times before. A co-worker said it was something like Groundhog Day.

So I wake up, again, feeling exhausted and knowing that I shouldn’t be. Shuffle to the bathroom and find that I have no hot water. Not cold, exactly, but not as hot as it should be. Clean but not refreshed isn’t a fun way to start the morning. It’s like you feel rumpled. Not your clothes… you.

But I haven’t written anything in a while–OMG a week?!–and I had a few free moments this morning, so there you are. I sincerely hope your morning is going much better than mine.