Next time, an actual getaway

It’s been a good week off, though I guess I’m still off since we have the holiday on Monday, but everyone’s off that day so doing the tourist thing will be kinda packed. I didn’t have to think about the office while I was off, and even though it rained a few days, my brain was doing everything it could to avoid being bored. I was bored for maybe an hour or so, but it passed. I avoided major chores, did a wee bit of cleaning, got some good walking and shopping in and got some “vacation photos”. 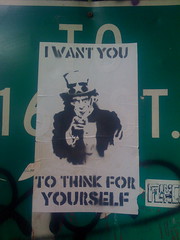 There were some disadvantages to not leaving “home” though. The biggest one was the inability to sleep in. Not that getting an early start is a bad thing, but I couldn’t shake the standard work routine of early to bed, early to rise. Also sometimes there’s just a lot of shit that you want to leave behind for a little while. Having a new perspective on stuff without the distraction of work is sort of interesting, however. I found some new places to eat and explore and realized the benefit of going to stores & businesses in the just-before-work-ends hours.

This morning I realized that getting up at the crack of dawn on a Saturday is great for hitting the Safeway, but forgetting to bring along the granny cart will mean multiple trips! But since I finally broke that invulnerable 200 lbs. on the scale, every little bit of exercise will be a good thing.