Everything is a Remix: The Force Awakens

Kirby Ferguson of “Everything is a Remix” takes a look at Star Wars: The Force Awakens. “[George] Lucas tended to copy scenes and shots, while [J. J.] Abrams tends to copy major story elements.” 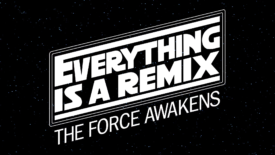 Ferguson picks out at least 14 separate elements that are clearly re-used from Star Wars: A New Hope, and while the familiar elements weren’t unwelcome, they were perhaps over-used.

I am typically not a fan of reboots, remakes and/or re-imaginings because I like to see something new. Borrowing classic themes is fine because that’s what we respond to, but I had to agree with those making the complaint that The Force Awakens didn’t overall feel like something new.

I love Ferguson’s series because he highlights when remixing goes well or goes poorly. And true to the title, nearly everything we see in entertainment is a rehash of something that’s happened before, whether intentionally or not. And while there’s nothing wrong with that, it helps explain why we are pleasantly attracted to something new, or alternatively turned off by something new because there’s nothing familiar to relate to.

So yes, “Everything is a Remix” and that’s just fine. Except for reality shows. Those can go die in a fire.