Earlier this year, we had the exciting news that the model used for the U.S.S. Enterprise in Star Trek was being restored. Previously in the gift shop, it’s now going to be on display in a more central/prominent location as part of the Milestones of Flight exhibit, unveiling this week. 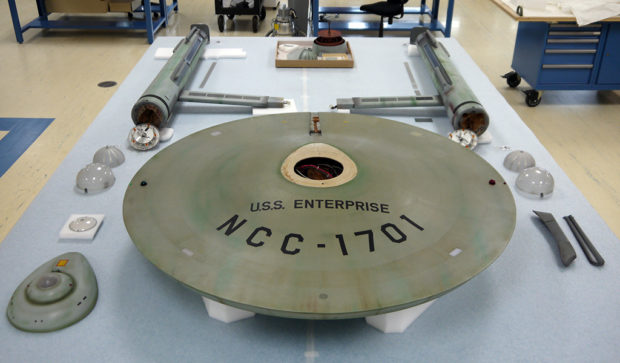 The National Air and Space Museum will celebrate the 40th anniversary of its flagship building on the National Mall July 1. An evening ceremony and an “All Night at the Museum” event will commemorate the date and officially reopen the Boeing Milestones of Flight Hall. For the first time, the museum will stay open throughout the night with music, tours and activities for all ages.

The model of the Enterprise is 50 years old, Paramount donated it to The Smithsonian in 1974 when Star Trek’s small run of 3 seasons had wrapped 5 years prior. No one knew the impact the show might have on our culture and unfortunately the model didn’t get the care it should have.

I’ve seen the model when it was in the basement gift shop, but it will be very exciting to see its fully restored splendor on display in the main hall!