Turned out to be a very fluid weekend, all told. Spring is really making itself known with that early chilly Spring that we know is coming but act surprised when it arrives. I currently work from home on Friday and woke up to the sound of rain, which was odd.

Not that we got a lot of rain, but we got more rain than we have in a while, which was actually enough to hear falling, and of course made me want to go back to sleep. So Friday was cold… and chill… and wet. Perfect for making a nice strong espresso and buckling down to some coding and other web-related work. 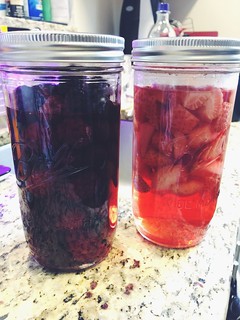 Generally my work from home days also allow me to do a little personal thing here and there. Sometimes it’s getting up with the sun to go for a walk/jog, sometimes it’s laundry or dishes, sometimes I can go through junk mail in between tasks and if I’m very lucky, I can get in a grocery/essentials shopping trip in at lunchtime.

Fortunately for me, I’d been adulting pretty hard, so I didn’t have a lot of those things that needed doing because they were already done. So of course, I decided to make some infused vodka! …as you do. I popped to the store for some fruit, and to another store for some booze and got to it. I found a few methods for sous vide infusions online and nearly all of them were both simple and advising to “go your own way” when it came to making recipes. But the ease of filling Ball jars with sliced (or not) fruit and booze and popping them underwater for 3 hours at 135°? Yeah, I was all about that.

I’m not kidding, it was that simple. My current test recipes are about 6-8 ounces of fruit and then fill the jar with booze (about 12-14 oz, because my jars are just over 24 oz). Set the sous vide to 135°, tightly seal and cook for about 3 hours, cool and strain. My unit has a timer and will turn itself off, but I’ve found no problem leaving the jars in the water as it cools. Also since there’s no cooking/boiling, there’s no alcohol lost so these are strong. And it’s much faster than storing the infusion in a cabinet for a few weeks.

I’m writing down proportions as I go, and unless I use a lot of jars at once, it obviously doesn’t make a lot at once, but I’m just one person and I do like to change things up, so having a cup and a half of a different infused spirit each week or so would do me fine. I know it would also work in bags, but I often have a hard time with the “water displacement method” of pushing the air out with solid food. I can just see my hard bought vodka spilling into the sink. 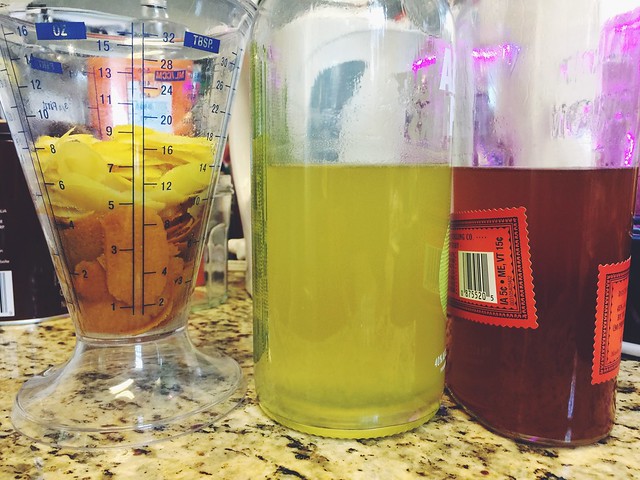 I also made limoncello and an orange infused bourbon which will likely be put to work making Old Fashioneds. Looks like it’s cocktail time in The Swanktuary again. Which also means it’s time to get my butt back out on the trails walking and jogging. It’s a trade off, of course, but a welcome one.

If anyone has any sous vide secrets or ideas for infusions, let me know in the comments or drop me a line on social media.