There are some cartoon characters that have a permanent shield of double-thick steel around them. When you think they’re finally gone, they come back in a new form.

Take our pal Scooby-Doo, for example. Scooby and his Mystery Inc. friends have been with us since 1969. That’s 37 years, kids; 259 in dog years.

Apparently there’s a new Scooby Doo cartoon in the works. Per the press release,

In the new cartoon [Shaggy and Scooby-Doo Get a Clue!], Shaggy and Scooby live in the ‘bling’d-out mansion’ of Shaggy’s Uncle Albert. They still have the Mystery Machine, but it can now transform into one of a number of transportation modes. Scooby Snacks are still available, but they are now infused with nano-technology that allows Scooby to fly or turn into a giant robot. Their mission is to keep the Scooby Snacks away from those who would use them for evil. 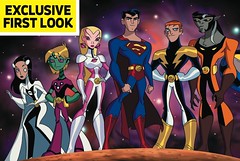 Also coming this fall, (Super-Deformed) Legion of Super Heroes. I’m a little torn about this one, I saw the way they did the LSH in the Justice League Unlimited episode “Far From Home” (screen caps here) and it was great, they looked like real teens and real heroes and the Fatal Five was very well done. They didn’t linger much on how that world worked, but I’m guessing they’re trying to warm people up to the new series. Which I’ll watch but I fear will totally whitewash the history we’re used to (ok, I know there have been many, but I doubt this will resemble any of them) and turn the Legion into a “buncha fresh teens with ‘tude!” I mean just looking at poor Braniac, it seems that he’d have both a superiorty and an inferiority complex about the size of his brain and his head, respectively. And poor Phantom Girl isn’t supposed to look like a ghost, she’s from Earth, just in a different dimension. *ugh! I could go on, but that would only reveal the darkest depths of my comic book geekery.

As Murtaugh was known to say, “I’m too old for this shit!”