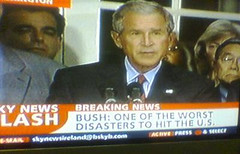 A bill becomes the rule of the land when Congress passes it and the president signs it into law, right?

Not necessarily, according to the White House. A law is not binding when a president issues a separate statement saying he reserves the right to revise, interpret or disregard it on national security and constitutional grounds.

That’s the argument a Bush administration official is expected to make Tuesday before the Senate Judiciary Committee, chaired by Arlen Specter, R-Pa., who has demanded a hearing on a practice he considers an example of the administration’s abuse of power.

“It’s a challenge to the plain language of the Constitution,” Specter said in an interview with The Associated Press. “I’m interested to hear from the administration just what research they’ve done to lead them to the conclusion that they can cherry-pick.”

Lopez, star of ABC’s “George Lopez,” which is entering its fifth season, called the TV studios “modern-day plantation owners. They are only concerned with the problems white people have, and they cast all these cute white people. It’s really sad for me to see, and I’ve seen it from the inside since 2001. There used to be these comedies with Bernie and Cedric The Entertainer … but it seems like they got afraid and reverted back to what’s safe for them.”

The criticism of the four networks revives a charge made by former NAACP President Kweisi Mfume in 1999 when he said that the four major networks were perpetuating a “virtual whitewash in programming.”

Previous research had revealed the more older brothers a boy has, the more likely he is to be gay, but the reason for this phenomenon was unknown.

I’ve only got one older brother, I’m just a natural overachiever!