100% worth the price of admission 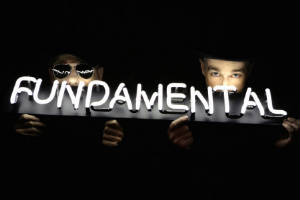 I think I may have satisfied my 80’s pop band requirements these past two years seeing Erasure and now the Pet Shop Boys. The concert was amazing, I was a bit concerned how it might go at DAR since that’s not really a dance venue, but I have to admit I’m getting pretty tired of shows at the 930 Club. It’s a good venue, but I like having the option of using a chair for a while. Not that we got much time sitting down with Neil and Chris, still I guess it’s the old fart in me that is perfectly happy to scream and clap and dance in my seat as opposed to on my feet. There was no opening act, they started around 8:20 and played til about 10:30 with a 20-min intermission. As Neil said to us, they played “some old songs, some new songs… and some songs in between.” The set design was pretty amazing, seemingly minimal at first, it was actually a set of 2×2 boxes with screens, each cell having its own LEDs to change the interior color as well as border. It made a great backdrop for projecting images or housing dancers but didn’t do much to draw focus away from Neil. Chris, not speaking or moving of course, was beyond it all, his keyboard at stage left wearing a hoodie and baseball cap and shades. The two dancers were a good addition though for some songs, their choreography (and seeming lack thereof) didn’t really mesh well with the performance. And I can now say I’ve seen the hottest male backup singers ever, though I’ll be happy to change that assessment with any future concerts — prove me wrong, entertainers, prove me wrong! I was a bit nervous about the seats, but we were close enough to count the sequins on Neil’s shirt, just not right up in their faces and that’s good enough for me. It is hard to find a “bad seat” at DAR, but for me, closer is always better with music groups.

Between take-home work and chores, I didn’t get much else that I wanted to get done this weekend and I’ve had to get right back into the thick of work. Still, these two articles caught my eye in the online Post today: