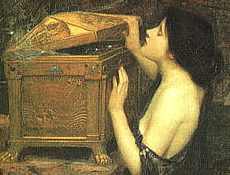 If there is anything I truly need to learn to do, it’s to not look in the box. Listen more to good Brian instead of evil Brian on my shoulders (barely indestinguishable from each other, except that good Brian’s cranberry juice has no vodka in it) and just don’t click, don’t enter the search into Google, don’t call the number, don’t type in that URL, etc. Sometimes there’s a reason that the past is the past, it’s helped make me who I am today and that’s a good thing, even if those events weren’t so good.

Recently I saw an ex’s picture in the “scene” section of a local gay rag. As the usual joke goes, I haven’t seen this person since we stopped seeing each other (well… duh). In most cities this would seem pretty normal, but in DC I figure I’m more likely to run into them especially since we like the same hangouts. So I looked them up online, read a bit of their blog, saw their flickr photos, and wasn’t really moved one way or another, they just seemed like a person I used to know. Still, what was my motivation for doing it at all? Did I want to see them doing well or doing poorly? Did I just want to catch up? I doubt it.

Last night at the concert, I saw a few people I know and others I recognize from around town. This wasn’t totally unexpected, as the NYT said of the Pet Shop Boys, “they attract an appreciative crowd in which women are a distinct minority”. As it was letting out, I saw a group that I’d gotten to know through livejournal, all of which are now in the “we’re not talking to you anymore” camp. In the group were a few people I’d told about the presale, I wasn’t trying to stir drama by contacting them, I just figured they would be interested and I’d let them know. It was barely an olive branch, however aside from one noncommittal response, I heard nothing back at all. So to see them there was… I don’t really know what the feeling was. Everett today said, it’s annoying to see people who’ve irritated us going on acting like they’re good people or something. And maybe that’s it, it’s was annoying. But because I’m polite, I did say hello to one of them, no more than as I was with the guy and didn’t feel like making introductions.

So back to the box… Since I was really impressed with the stage design and song set design, and one of the “camp” I saw is a writer and I figured would have something good to say about it, I checked out their journal. I know I probably shouldn’t have, that there was a chance I’d read something I didn’t need or want to, but hey I wasn’t listening to good Brian just then. There wasn’t anything about the concert yet, but above the fold was an entry talking about another friend that I guess I’m on the outs with and how a regular social event, that Ev & I helped kick off, is still happening… just without us being notified or invited at all.

It got me thinking about people and friends, and our interactions and the duration of friendships. I was trading IMs with the BFF earlier and rather than re-cap, I’ll just quote:

Thankfully I was pretty busy around the office today so I didn’t have time to dwell on it too much. But I feel like I’m ready to just have friends, maybe you don’t see them all that often or maybe you see them every day, but either way you’re adults and you stay friends and when something’s bothering you, you speak up, you don’t shut down, and you don’t “take sides” in someone else’s falling out causing even more collateral social damage.

But it’s nearly time to go, my fingers are nearly numb from the office a/c being so cold, and thanks to Serge, I’m hungry for lasagna which I don’t have the stuff to make tonight… maybe tomorrow.