dating: It’s been one week…

I can handle flaky, some people thrive on being flaky while others exhibit it to such a degree that everyone else around them consciously or subconsciously works to pick up the slack. Mistakes are ignored, fatal slips are instantly forgiven and it just becomes a known that said person is flaky. And like I said, I can handle flaky, to an extent, I just need to do my research first to know how flaky the crust is before I try to turn it into a pie.

Last Sunday I was to have brunch with this guy, we’d met through friends and met up for one-on-one outings twice before. I admit that I am still a little shaky as to whether these were dates or not, but it seemed to be progressing nicely enough that it wasn’t yet a huge concern. That morning, I lost track of time (thank you TiVo and twitter) and ended up running a wee bit late, then as we were down to one elevator that day, I thought I was running even later. I sent a text advising that I might be late and finally got down to the street and started walking. The place was just down in Adams Morgan so I didn’t expect to be too late, really. I didn’t get a text message back, so I assumed that he was either on his way or already there. 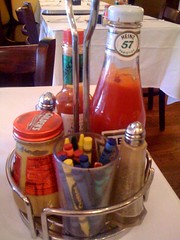 I got to the restaurant, on time actually, and he wasn’t there. I figured if I was running late, perhaps he was as well and I waited a bit, walked within a 1/2 block to look around and came back and still nothing. No text message, no call, nada. I normally like to wait for my dining companions before heading into a restaurant, especially in DC where many places make you wait anyway. The place looked pretty empty, so playing against type, I got a table for two–actually the maitre’d didn’t understand me and gave me a table for four–and sat down. It was about :05 after by now, and in the past this person had a habit of being a little late, so once again against my better judgement, I ordered a mimosa and continued to wait, telling the server that I was going to wait until the other person showed to order.

Another 10 minutes or so passed and I called and left a message asking to call me back and let me know what was up. One of my occasional failings is that I can be too nice, so I was ready to be understanding if there was an overslept or inability to get a bus/cab or whatever. However, as there had been no text message and no call and no show, my patience was wearing thin. Not even two minutes after I called and left voicemail, I get a text message, not a call, a text message. The gist of the message was that he’d been sick most of the night, thought he might be able to make it but was mistaken. “I will call later to try and reschedule.” I sent back a very terse, “Ok” and motioned for the server, explained that my friend would not be joining me and apologized.

Now, I don’t mind dining alone, but in this instance I couldn’t help feeling a little bit of the burn of clearly being seated at a table meant for more than just one and after not even 15-20 minutes and only one drink ordered, leaving on my own. I didn’t leave in a huff, but often my facial expressions betray exactly what’s on my mind. Due to the ambiguity of his message, I did delay my meal at home for a little while, but eventually gave up on hearing from him, had something to eat and got on with my day. Since I was looking forward to a week off from work, it didn’t bother me nearly as much as it should have, but still what the hell, man?

It has been a week since, and I haven’t heard word one from this guy and at this point I don’t expect to. It’s a bit disappointing, but more because it’s nice to think that someone’s interested in you and then to see that they haven’t got themselves together enough to seem concerned. At the least about respecting you, but more importantly not offending you! But… c’est la vie and lesson learned, right? 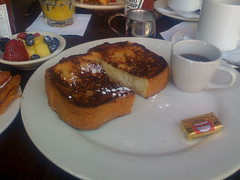 In contrast, this morning’s brunch at Busboys and Poets was… at least relatively on time. I met a friend that was running late (and let me know) and when he got there told me that he’d overslept. We had a delightful time, though the food there has never impressed me very much and today was no exception. The service was friendly, but a little on the slow side. Come to think of it, that’s pretty much descriptive of every visit I’ve had to this location. It ain’t great, but it ain’t crap either. They could certainly do well to improve the quality of their menu, but I wonder if the rise in prices would turn away their core customer demographic.

I’m glad we have another day to the weekend, but it will be hard to head back to the office after so much time off. Now if we can just blow through the rest of this “regular August” weather and get back our nice Fall temps, I’ll be a very happy man. 🙂