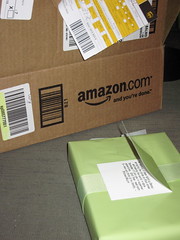 A big thank you to my friend Michael out on the other side of the country. I’d call it an early Gift-mas present, but when I read the card I had a good idea what was inside and there was no way I was waiting to open that.

With one thing or another these days, I don’t really e-mail or chat with him as much as I used to. We used to both play on Champions MUSH (i’m amazed I left that link active) in my first bit of old-school MMORPG, maybe without the massively. I wrote more than a few entries about it in my journal and it was both fun and frustrating, I met some great people and met some people that would prepare me for dealing with people on the internet in years to come. We played characters in a team a bit like a magical version of The Authority, he and I definitely in the Apollo and Midnighter roles.

We had a great GM and a lot of fun adventures, it also helped me realize that “RP” doesn’t really belong in many of the MMORPGs of today. In a conversation with a friend about his spouse that RPs in World of Warcraft he said “She rarely does any questing or anything — just wandering around Stormwind talking and having arguments…” And it’s true, even on a dedicated (or unofficial for CoH/V) RP server, it’s rather hard to advance one’s character while getting involved in serious roleplay. Still, they can call the genre whatever they like, I still have fun playing.

If I had endless free time and unlimited resources, I would go and visit many people whose journals I read, but for now I’m content to keep in touch as best I can and in Michael’s case, read about his life and be pleased that he’s realizing his dreams.