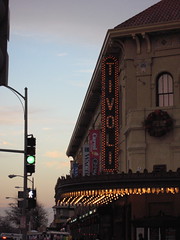 Rachael Ray likes to say, “I’m not a chef, I just cook.” I kinda feel the same way about my photographs, I just have a camera to capture memories, things that amuse me and I want to keep, I don’t consider myself a photographer at all.

I’ve been approached in the past by other flickr users doing picture searches, asking me if it’s ok to include a photo of mine in a project they’re doing or on another website. A lot of the photos they were asking to use weren’t mine so I pointed them in the right direction, but last July I got a request from someone claiming to be with here! network and looking to use some of my Baltimore Pride photos for a national pride photoblog. I said sure, just let me know which pics they wanted to use. I never heard anything back and didn’t think anything of it until I was clearing out my flickr inbox today and saw the message again. I followed the link in the e-mail to their site and lo and behold, they did use some of my pics in their photoblog.

I don’t think the photos were anything special, but it is nice to have a little recognition. Inspired by Martin, I’m still trying to take at least a photo a day. I thought that I’d be hard pressed to find new subjects, but they’re presenting themselves pretty readily. Though I think I’m more photoblogging than taking pictures, as I grab stuff that makes me think of an entry around it, or that just looks kinda remarkable. I just doubt I’ll be blowing any of them up and framing them.

In other news, I think I’m getting sick. Nothing is agreeing with my stomach lately aside from water and I have a recurring sore throat. Time for the fizzy-water vitamins!