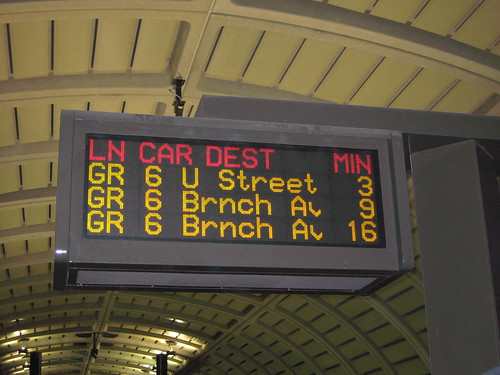 There’s a proposed 2008 budget for Metro that would result in both reduced service and fare hikes (makes perfect sense to me!) that has more than a few riders crying foul and reaching for their car keys. I remember living in the burbs and coming from Huntington to Federal Triangle every day. I had to get up at the ass crack of dawn and get to the station early or there’d be no parking there, and on the off chance I had to come in late, there’d be no parking downtown either. And with parking and round trip metro fare I still felt like I was getting grifted on a daily basis and there’d be little cost difference, aside from gas, to paying to park in a garage vs metro. For people without cars, it’s still better than taking a cab to your job, but for those that can drive, raising fares or moving around peak/off-peak times can seem like penalizing people for being unable to come into work later at the time of their choosing.

When I saw the above metro sign yesterday morning, my decaffeinated brain really thought for a second that the next train was going to take me just one stop from my station and toss me out. Maybe I should get a coffee maker in the house… or an $800 automatic espresso machine?