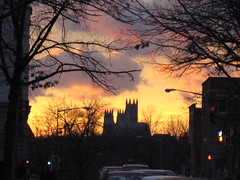 Finally, winter is asserting itself and we got a nice snowy Sunday afternoon and evening. Not that it did much to last or anything, but it was a lot of fun to watch while I cleaned house and played games. And it seems like even a small snowstorm left some people out in the lurch. There are a few no-shows at the office today and a few delays due to school and daycare. Then again, I suppose one-two inches when you’re not really prepared can cause a lot of problems, even the gov’t was on unscheduled leave — didn’t that used to be called liberal leave? Ah, yes it did.

J and I went to the Phillips Collection on Saturday to see the Société Anonyme exhibit and it was amazing, much like when we took the office field trip to see the Dada exhibit some months back. I plunked down for a membership as well since it would be nice to get advance showings and free admission to stuff there. We ran a few errands: cookies and coffee at Firehook, wine from Best Cellars and a quick run to Safeway so I could make dinner (chicken with 40 cloves of garlic) and settled in at my place to see that week’s Smallville and then watch the Pirate special edition of Mythbusters. Mythbusters was great, but one of the best moments was just a few seconds from the middle of the broadcast:

I’ll just bet they are, Adam…

And just for fun, a nifty little Greasemonkey script for getting rid of the extra exclamation points seen on LJ, myspace, and anywhere else people don’t get that it just takes one to express excitement (and for those that mock them as well).