a la carte is the new black 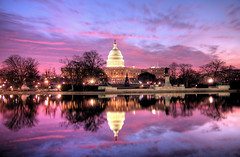 It’s shots like this that make me realize I don’t know jack about photography.

I had another strange dream last night, I think it can be attributed to the 3 martinis I had with dinner.

J and I went to PS 7’s over near Chinatown. They’d extended their restaurant week through the end of January and I believe he got 1000 pts for the reservation through OpenTable so it was a double bonus. The place is pretty swank-looking, it’s nestled (read: hidden) right next to Techworld Plaza at 8th and I and I’ve walked around the area before and never noticed it, though the hostess said they’d been there since 14 Sep 06. We got there a bit early and the place wasn’t really full so we waited a bit in the lounge which was quiet like a library however there were only about 7 people in there and playing Everything But the Girl tends to mellow out the mood a bit anyway. We each had a Cosmopolitan (with their house made sweetened lime juice) and made our way to the table. Looking over the regular menu and the restaurant week menu, we both decided to order the prix fixe choices and J thought that maybe they were smaller in size than if we’d gone a la carte. It seems that’s the new thing for restaurants lately, even Chef Geoff’s had gone a la carte when we were there last. I’ll definitely have to go back sometime and try their regular menu, it’s divided up into 6 zones plus dessert, each one in a different price range and the sixth being a tasting menu. I’m mostly in love with their menu because pear features strongly in more than a few dishes and their one martini “A Pear Supreme” (with house made pear nectar) which was great. I don’t normally have martinis with dinner but this was a very good cold weather cocktail, it had just a hint of spice to it.

I’m going to have to either stop drinking before ordering or just pay more attention as I generally remember the “star” of the dish I’ve ordered but often forget what else accompanies it. When the shortribs arrived, they were wrapped in pastry studded with mushrooms and veggies and I was looking at it like, “Is this what I ordered? Really?” Even more funny was that at a quick glance his entree and mine were cut and prepared in about the same size and shape.

Overall it was a great experience and I’d recommend it to other people. I might try getting some office-mates there for lunch one day soon since their special runs to the end of the month.