I wrote through my journal on a post with no name…

Just a bunch of random disjointed things, really. It’s been pretty busy at work lately and off-hours are mostly spent not thinking and not making decisions and being lazy and trying to relax with television and video games. It’s nice. Especially with it being cold outside, the last thing I’m trying to do after work is wander all over town freezing my nuts off when I could be inside my nice heated apartment with a hot cup of tea, or a martini… or two.

City of Heroes had a Double-XP weekend 1/26-1/28. J stayed the weekend 1/26-1/28. The conflicts of interest were quite obvious, yes. However as we were both into not thinking and not making decisions, we were pretty lazy and stayed in, ordered pizza, watched movies. He watched some tv and I played video games. He joked about being a video game widow, however he was watching “What Not To Wear” on TLC and had I been watching it with him there would have been a non-stop stream of snark that would have driven him crazy. So I was given “permission” to play.

It was a good thing too, as I got my villain character Dark Bogi up to 50, currently the limit for characters in the game. I’d already unlocked the bonus content with previous hero characters, so I’m not really sure what to do now. I still enjoy playing, but it’s getting pretty tedious. The same villain groups, the same missions, the same maps. I don’t consider badges, temporary powers and costume parts to be “content”, I know that opinion isn’t shared, but still when most of the seasonal and special events come around, they seem to halt advancement of characters while people scramble around to do the special missions. From a profit perspective I recognize this is a very good thing but it’s just getting kinda boring. Some of the upcoming changes don’t really thrill me because they’re adding aspects I don’t much like about MMORPGs, auction houses, an economy, stuff that turned me off of WoW. 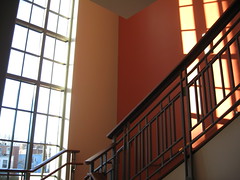 Yesterday at work there was an odd fire alarm incident. None of us in the room heard anything at all, though one person did say they heard a very faint alarm. One of the managers came through to tell us we needed to evacuate as there was a reported fire emergency. Now no matter what I’m doing, when I hear this, I automatically grab my gadgets and briefcase, put my coat on and get ready to leave. I may wince at the thought of standing out in the cold until the “all clear” is called, but even if it’s a drill or a false alarm, I’d rather be outside freezing than remain in a potentially burning building. Still, one of our co-workers didn’t budge and as we’re all putting our coats on, she turns to me and says, “Are they really serious about us having to leave the building?” Clearly this was an inconvenience to her, whether it was about standing out in the cold, or stopping whatever she was working on. The very question was so shocking that I couldn’t even come up with an appropriate snarky comment. It turned out to be a false alarm, but still it was pretty unbelievable out of all of my “the rules don’t apply to me” experiences, that someone thinks a fire evacuation is optional.

I was in the Giant last night picking up a ribeye, red wine and grapes for dinner and snacks and while I was in line, it started to snow outside. This might be the first time ever that I was in a grocery store while it was snowing. I was in my checkout line daze and wouldn’t have even noticed it if the cashier on the next line hadn’t been clapping and shrieking about it. I looked around the store and could see some faces tensing up as the “milk, bread, eggs, toilet paper” mantra threatened to break through and cause them to hop out of line. I’m only 2 for 4 on that list myself, but as a former friend and I mused over drinks once, “I don’t get it, you need all those things so you can make bland french toast and then clean up after yourself later if it gives you the runs?” The snow flurry was over before I even got out of the store.

Dinner turned out very well, I’m totally loving the grill pan. J and I did tuna steaks over the weekend, so it’s seen fish and red meat. Chicken or pork next! I haven’t had grill marks on anything out of my kitchen since I owned a George Foreman grill and that little thing was such crap. It had one cooking style, well. I could put a piece of meat on it for barely two minutes and it was already done completely through. Cleanup was a nightmare, and eventually the non-stick coating started flaking off which gave me a nice little freak out. I’m definitely happier with this pan.

Today is uneventful so far. I got cruised in Starbucks and read about a dinner reservation scalping service in the NYT and tried to catch up on a few webcomics. Now work beckons.