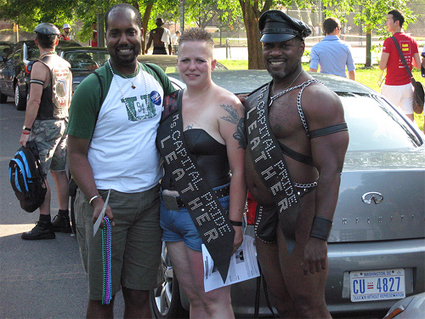 See all of my Capital Pride 2007: Parade pictures

Man do my feet hurt! — That was my first thought when we reached Thomas Circle, but it was a lot of fun.

We got down there in plenty of time and tried to find the Whitman-Walker uh, walkers, but we couldn’t really locate a bunch of them so we sat around on the grass and relaxed for a bit. I expected there would be a lot more people from that group showing up since they’re sort of arranging the whole thing, but when it came down to it, there weren’t many of us behind the banner and we were leading off the whole parade! I got some good shots of passersby while we waited for things to get started and I can’t recall the last time I said, “Can I get my picture taken with y’all?” but as you can see above, the Capital Pride Leather winners certainly didn’t mind. I found that shouting someone’s name is a great way to get a “1-second before” candid shot as I saw Michael walking by and some others.

We got going just a few minutes after 6:30. It wasn’t too hot, and at times there was a bit of a pleasant breeze. I hadn’t walked in the Capital Pride parade before, but it’s quite the experience. Even though we were sort of sparsely populated, our group got just as many cheers and waves and applause (and catcalls) as any other. 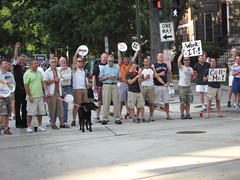 That attention could easily become addictive, though most of it was just trying to get us to throw beads. When I ran out it was all elbow, elbow, wrist, wrist and smile. Most fun was seeing my friends along the route as I walked past, since I had no idea where they’d all be hanging out.

When we got to the end of the route, we backtracked a little bit and stopped at 14th and P to watch the rest of the parade. It was the homestretch though and we were on the opposite side of the viewing stand so many of the groups were moving quickly and any really creative mega-floats were facing the other direction, but it was a good spot for calling out to my friends that were walking in groups.

After everything was done, we headed to 1409 Playbill Café for some cocktails and grub and Justin brought me back to my place afterwards. It was about 10pm and my body was pretty exhausted, I felt kind of awake but eventually the body won out.

All in all, a really fun day but I can still feel it in my feet this morning!