Would ya believe this is *clean*? 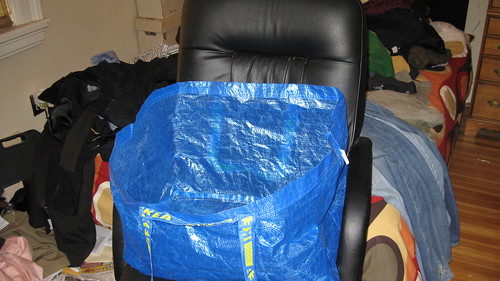 I meant for it to look this way, honest! How could I sleep on a bed full of dirty clothes?! The times I have done that in college notwithstanding, it’s laundry day! I woke up feeling like my stomach was auditioning for a scene in Alien, so I called off work and got a bit more sleep. Then like a fool I remote’d into the office machine just to check things and started some work. After looking around the apartment, I realized that I really needed to get a few loads in the wash. Totally loving the IKEA big blue bag for that, I wish I had a way to give it a sturdy stand so that it could truly act as a laundry basket.

I sorted everything out to about 5 categories, the usual amount when I’m not washing sheets and decided 2 or 3 loads at a time would be best. The bag can’t really hold much more. So I get to the laundry room thinking that maybe one or two other building residents might be in there and there is one woman. I’ve seen her around before, but mostly for holding doors or elevators. I smile and say good morning and she says nothing (I know she can hear and speak English from previous encounters). So I get started and realize that it’s good I only have 3 loads to wash as she’s got all but 3 washers occupied and every single dryer taken! It’s not really a huge deal since I won’t need a dryer for at least 30 minutes, but it’s the complete lack of acknowledgment that gets to me. Even if we’re not next-door, we are neighbors that have never had cause for bad vibes. And if you don’t want to say hi, that’s cool, but don’t also give me the look like I’ve invaded your territory.

For the most part, I’m very friendly with my fellow building dwellers, giving the standard smile or greeting when you see them in passing, or maybe chatting on the elevator. I know that some people don’t want to be bothered by that, but even they will give the eye-contact & smile maneuver that indicates no ill-will but also does not invite further pleasantries. Of course there are other gays in the building and many of them are friendly, but there is a bear couple here that I know other DC people know, even if only virtually. While one of them gives at least the minimum required or sometimes actual conversation, the other refuses to acknowledge my (or possibly anyone’s) presence. Really it’s no big deal except that for some reason we wind up in the same areas in the building a lot of the time. I guess I can chalk it up to a good dose of misanthropy, still it kinda bugs ya when you feel like we ought to stick together. I don’t mean have each other over for dinner just because there are other queers in the vicinity, but at least acknowledge each others’ existence. 😕

It looks lovely outside. I will make it out and about and have more entries about the outside world soon enough, we just need some consistently nice weather!