“Men and nature must work hand in hand…” 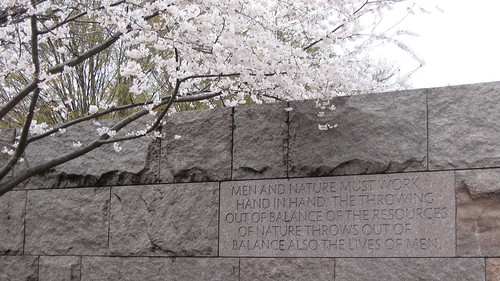 — President Franklin Delano Roosevelt, Message to Congress on the Use of Our Natural Resources, January 24, 1935

Even though it was a little misty in the morning and overcast in the afternoon, it wasn’t such a bad day to check out the cherry blossoms around the Tidal Basin with some side trips through the FDR and World War II Memorials. A lot of my pics got a bit of a washed out quality to them that isn’t exactly bad, in some photos it almost brings out the colors a bit more. We did a good bit of walking around, it was really windy, but slowly warmed up as the day went on.

After getting our fill of nature and tourists, we headed over to Eastern Market to find some lunch and I really overdid it. We ate at Tunnicliff’s Tavern near the Market and it was really good. The service was curt, to say the least, but our food was delicious. It was just simple lunch fare, I had a Black and Bleu burger and he had a Reuben, but both were much better than we were expecting. And then things got a little piggy…

We strolled through the Market and got some good samples of smoked Cheddar and Sage Derby cheeses then I picked up a cinnamon twist pastry at one of the stands. I’d just finished it when we passed Ben & Jerry’s and of course we had to step inside. I got a milkshake made with ONE Cheesecake Brownie ice cream and as much as it hit the spot, it was definitely my limit. I barely stayed awake on the metro ride home and was in the door no more than 10 minutes before I was laid out on the couch. In the middle of chatting with Michael I told him that I was giving into the food coma and I passed out shortly thereafter.

If there are any really nice weather days coming up and the blossoms haven’t been rained out and/or blown away, I’d go down there for another photo day. I know it’s such a touristy thing to do, but it’s also a good walk, plenty of inspiration for good pictures and you can always build up some good karma giving people directions or being the “could you take our picture?” guy.