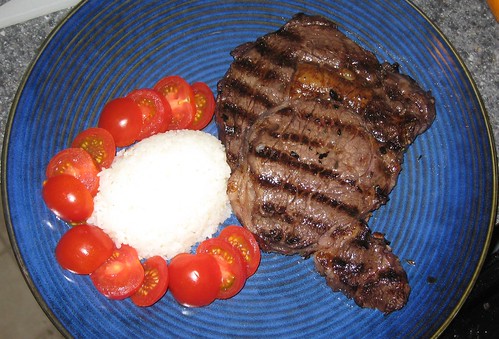 I really love my new dishes! When I was living in Logan Circle and had a roommate, I bought a really nice double set of Mikasa settings for 4. He didn’t contribute anything to the kitchen and between our cooking and take-out habits, we went through dishes pretty quickly. We also had a large dishwasher, so it was able to take a lot of dirties before we had to run it. When I moved out, I still had 8 place settings and over time I found that they were just too much for me, in addition to my having gotten bored with them. They were lovely, and more importantly on sale, when I bought them so it wasn’t a bad thing, but they were very plain-jane.

On my trip over to the new Target, I saw a lot of dish sets that I liked, but of course the one I most fancied wasn’t all in one set. If I shopped online, when it was in stock, I could have bought sets of 4 of each, bowls, plates and mugs. Oddly though, in the store, the mugs and bowls were sold in sets of 2 while the dinner and salad plates were in sets of 4. What’s up with that? Plus they had horrible stocking those first few weeks, so it took me a while plus Gregory making a trip to another Target for me to get the full set. But I just had to have that blue stoneware. Also in the past where I felt the need to fill up the “white space” on a plate, the color keeps me from adding another spoonful of side dish. Besides, I also made some dessert to go with!

Anyway, it’s Spring which means its time to grill. Mainly because I can keep the windows open and the smoke alarm doesn’t go off as often. Next experiment will be grilled salmon a la Ina.